Back When D-Day Was More Than a Photo-Op 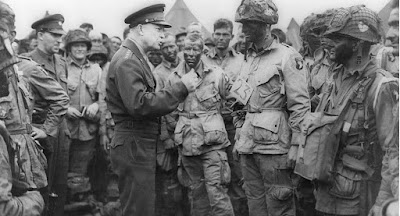 D-Day memorials, today's included, have been transformed into a photo-op for a gaggle of politicians, some of which should be ashamed not proud of their attendance.  Sabre-rattlers, likeTrump, come to mind. Trump who grotesquely basks in the ersatz glory of the thousands sent to their deaths yet who did whatever was necessary to ensure that he didn't share their sacrifice when it was his turn during VietNam. People who don't hesitate to send other peoples' kids into harm's way.

Which brings us to Dwight D. Eisenhower, the Supreme Commander of Allied Forces Europe who ordered the invasion on 6 June, 1944, and who later became president of the United States. This is how Ike commemorated D-Day on its 10th anniversary.

THIS DAY is the tenth anniversary of the landing of the Allied Expeditionary Force in Normandy. That combined land-sea-air operation was made possible by the joint labors of cooperating nations. It depended for its success upon the skill, determination and self-sacrifice of men from several lands. It set in motion a chain of events which affected the history of the entire world.

Despite the losses and suffering involved in that human effort, and in the epic conflict of which it was a part, we today find in those experiences reasons for hope and inspiration. They remind us particularly of the accomplishments attainable through close cooperation and friendship among free peoples striving toward a common goal. Some of my most cherished memories of that campaign are those of friendly cooperation with such distinguished military leaders of foreign nations as Field Marshal Montgomery, Admiral Ramsay, Marshal of the Royal Air Force Tedder, Marshal de Lattre de Tassigny, Marshal Juin and Marshal Leclerc. I recall my pleasant association with the outstanding Soviet soldier, Marshal Zhukov, and the victorious meeting at the Elbe of the Armies of the West and of the East.

These lessons of unity and cooperation have by no means been lost in the trying period of reconstruction since the fighting stopped. Rather, we see peoples, once bitter enemies, burying their antagonisms and joining together to meet the problems of the postwar world. If all those nations which were members of the Grand Alliance have not maintained in time of peace the spirit of that wartime union, if some of the peoples who were our comrades-in-arms have been kept apart from us, that is cause for profound regret, but not for despair. The courage, devotion and faith which brought us through the perils of war will inevitably bring us success in our unremitting search for peace, security and freedom.

Not a touch of braggadocio, the boastfulness of the victor, everything we have come to expect from the lunatic, Trump. No mention of Patton or Bradley or how "America defeated the Nazis."  A brief, attenuated tribute to unity, cooperation, reconstruction and reconciliation. Nothing remotely hollow or disingenuous in it.

Now I know this is the sort of thing that launches some readers into regaling us all about the subject's failings, in this case Eisenhower's flaws. Do me a favour and put that back up your ass where it belongs.  This is about D-Day, the war in Europe, and its commemoration. That's it.
Posted by The Mound of Sound at 10:01 AM

When CBC launches into D-Day memorializing I switch over to BBC International. As near as I can tell the Brits are more subdued about this. I have not heard more than a mention about D-Day on BBC or ABC in Australia. Is it just Canada and the US politicians that make their patriotic demonstration? The Queen always says something.

Ike also wrote another letter, in case it all went wrong,

It was quite a bit shorter:

“Our landings in the Cherbourg-Havre area have failed to gain a satisfactory foothold and I have withdrawn the troops. My decision to attack at this time and place was based on the best information available. The troops, the air and the Navy did all that bravery and devotion to duty could do. If any blame or fault attaches to the attempt it is mine alone.”


Yes he did, Jay, and I am familiar with it but that has nothing to do with this post that concerns how then President Eisenhower responded to the 10th anniversary of D-Day.

To be so all embracing to everyone, people, winners, losers and eventual adversary takes a pretty broad mind. Of course, he'd actually been there at the sharp end of war and his organizational capabilities, however delegated, were phenomenal. He managed to not piss off anyone with the performance of his duty. An unappreciated man, about as calm and unassuming as you could wish for but obviously in charge. A very nice speech that embraced rather than rejected, and above all praised the efforts of real people.

Thanks for posting his words. I don't recall ever having read it before. If only the US had behaved as he did personally.

My comment was not meant to diss Ike, it was to add to your contrast of Ike and our current “leaders”.

Ike was ready to take all the blame if the landings failed, not point the finger somewhere else.

I can’t think of any modern politician with this level of moral fibre and a sence of accountability.


Thanks, Jay. I took your comment the wrong way but your clarification helped. We have not had much in the way of leadership for several decades, the present placeholder not excepted.

It seems that the era of diplomacy has passed. In America, diplomacy has been displaced by threats or use of military force as Washington's preferred instrument of foreign policy. Meanwhile the lunatic in the Oval Office does his level best to undermine America's closest alliances and international institutions.

BM, it was certainly one of the most gracious addresses that I can recall. It was done via a statement released by the White House. No photo op, nothing. Just an invaluable reminder of what D-Day represented by the same man who had been its supreme commander yet never alluded to his role nor claimed any glory for it.

This says much more than I can.

Like Remembrance day came from Armistice day when we celebrated the coming of peace; wartime memories have become distractions for politicians and political commentators .
I just about puked today when Premier John Horgan tried to attach himself( as many others have) to the D Day landings.
Like so many others he recalled how his father had sort of , kind of, known of the landings on the French beaches.
At the end of the day so much of what we have heard really is fake news!


I read Jenkins piece, Trailblazer. I agree with much of it but he does overreach from time to time and some of his contentions I just don't buy.

As a fourth generation military person I am willing to take the slings and arrows that will rain down when you folks read this post.

I am bloody sick and tired of the revisionist history that has now set in in when we revere the statement that "We fought to gain freedom and and all of us should remember our freedoms come come from their sacrifices!"

What we fail to remember is that this was a war, fought to repel the invader and transgressor of International Treaties. The people who went off to war did so for many reasons - a sense of duty, a way to get out of the depression, and of course conscription. Did any of them think they were defending freedom? Freedom from what? I very much doubt it - I know I have spoken to many.

I am not diminishing or disparaging the Veterans involved, why would I my Father was a POW for three years, but lets get away from the 21st Century 'jingoism' that permeates all of the maudlin and yet joyful celebration.

After all if we are celebrating such demonstrations and mantras of "The defense of Freedom" then we should be decrying the fact the very people celebrating in such a way are attacking the very bases of that "hard won freedom" in their very political ways.

.. perhaps I have some things I could say.. perhaps not
but I cringe that trash is allowed on that beach
to walk or speak on such hallowed ground

I don’t want to hear anything from politicians during commemoration ceremonies such as this one. Just lay the wreath and keep your mouth shut. And leave the spouses out of it. The Harper people and their provincial imitators took it to a sickening level. They even sent Harper’s wife as the Canadian Government rep to one of them in Europe along with Richard Rohmer and some RC padre who gave a speech talking about how wonderful Julian Fantino’s efforts had been for the vets. Now that’s where we are. It’s a demonstration of absolute disrespect and they don’t get it.


Ben,my dad was a horribly wounded infantry lieutenant and he largely agreed with your views. His men fondly called him "Boss" even in their letters to him in hospital, some of which my dad kept and passed on to me. He certainly didn't beatify our soldiers, far from it. He said that combat transformed men. It either turned them into real men or bums and there were plenty of both. He also was of the notion that soldiers didn't fight for King and Country but for their unit, for their comrades and for the guys either side of them.

Here's the thing. That was never good enough for the folks back home or for some of the vainglorious types at the Legion. No, nothing would do but that this was laundered, groomed and ennobled for government purposes and public consumption.

Many of the dead were either damned unlucky, especially those hit by shrapnel, or did something foolish, i.e. those too easily picked off by snipers. Some were well led, others were led to slaughter by incompetents. That's not to say they weren't brave, they were. But there's a difference between the bravery needed to face combat and acts of heroism.

As for this 'sacrifice' crap you could argue that some of those who came back, the real basket cases, sacrificed most for their nightmarish war lingered for years. I met a few of them but I never met one who boasted of his 'sacrifice.' That's the crap that politicians churn out and civilians swallow.

Mound we can agree on this one to, it makes the point far better than you or I decrying the "crap".

MPP Toby Barrett praising the sacrifices because it enables us to have beer in corner stores!!

.. I left a comment about MPP Toby Barrett on Politics & Discontent..


The Barrett fiasco reveals how there's a little Trump in a lot of today's Conservatives. The seeds, it appears, have been planted.

Didn't the soldiers fight for Toby's freedom not to applaud and cheer when Doug Ford opens his cake hole?