Britain's Next Prime Minister, As Those Who Know Boris Johnson See Him 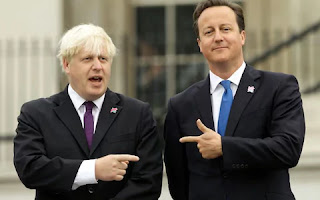 It seems almost inevitable that Boris Johnson will succeed Theresa May to become the next prime minister of the United Kingdom.

So who is this controversial character, the former Lord Mayor of London? The Guardian offers insights of those who have known him best.


“Boris, well, he’s the life and soul of the party but he’s not the man you want driving you home at the end of the evening.”
Cabinet minister Amber Rudd, speaking during a 2016 debate before the Brexit referendum
“It is a common mistake to suppose Johnson a nice man. In reality he often behaves unpleasantly.”
Max Hastings, Johnson’s editor at the Daily Telegraph, in a 2018 column for the Times

Guardian Today: the headlines, the analysis, the debate - sent direct to you


Read more
“[He is] much diminished in terms of integrity, in terms of political courage and in terms of credibility… I used to think he would be fantastic at Number 10 but those days look a long time ago.”
2018 BBC interview with Guto Harri, director of communications for Johnson’s mayoral administration, 2008-2012
“I wanted to help build a team behind Boris Johnson so that a politician who argued for leaving the European Union could lead us to a better future. But I have come, reluctantly, to the conclusion that Boris cannot provide the leadership or build the team for the task ahead.”
Michael Gove, launching the leadership bid that derailed Johnson’s attempt to become prime minister in 2016
“[Johnson is] a man who waits to see the way the crowd is running and then dashes in front and says, ‘Follow me’.”
Michael Heseltine, Good Morning Britain interview in 2018
“The Johnsonian creed [is] that it is, in his own words, acceptable, sometimes desirable to lie. Certainly that approach has been advantageous to him. But it must come at a price.”
Sonia Purnell, Johnson’s biographer and one-time deputy in the Telegraph’s Brussels bureau, writing after he withdrew from the leadership race in 2016
“He’s lied his way through life, he’s lied his way through politics, he’s a huckster with a degree of charm to which I am immune. As well as being mendacious he’s incompetent.”
Conservative former minister Chris Patten in May interview with Bloomberg
“I’m afraid he’s shown, especially during his period as foreign secretary, that he doesn’t have the necessary skills and capacity [to be leader].”
Conservative MP and former attorney general Dominic Grieve in May interview with LBC
“He’s an enormous character but not a team player… And he doesn’t know if he’s a journalist or a politician, but he does know it’s all about him. The more he repeats what everyone can see is not credible, the more his own credibility disappears.”
Former foreign office colleague Sir Alan Duncan, 2018 interview with the Times
“The worst foreign secretary we’ve ever had... Disinterested and out of his depth he cared nothing for our situation. Good riddance.”
John McKendrick, attorney general of Anguilla, bidding farewell to Johnson as foreign secretary with criticism of his response to the British Overseas Territory’s devastation during Hurricane Irma in 2017
“I think he honestly believes it is churlish of us not to regard him as an exception, one who should be free of the network of obligation which binds everyone else.”
Johnson’s Eton housemaster, Martin Hammond, in 1982 school report

Another clown in charge. Oh goody.


That was my take on it also, Toby. Another sub-par leader just when we can least afford their kind.

Another "Trump" and an arse hole to boot.

This does not show the UK in a good light.
He is popular because of his intolerance toward people of colour and the 'rightness'of those of white UK birth even though he ,I believe, is American born( go figure).
Like other ultra right wingers , he is a lightning rod for those with short tempers, as he has shown.
TB