Meanwhile, What About Fracking? 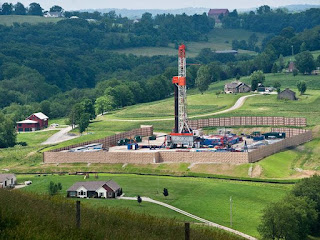 The Trudeau government is looking for climate kudos for Canada's success in fracking natural gas. The idea is that, methane leaks aside, fracked gas is a lower-carbon alternative to other fossil fuels and, for that, Canada deserves to be rewarded with carbon credits.

Of course British Columbians know that fracking causes earthquakes, loads of them. It also leads to contamination of groundwater reserves. Now, researchers in Ohio have linked fracking to higher levels of household radon, the second major cause of lung cancer.

Measuring and geocoding data from 118,421 homes across all 88 counties in Ohio between 2007 and 2014, scientists found that closer distance to the 1,162 fracking wells is linked to higher indoor radon concentrations.

The study also found the average radon concentrations among all tested homes across the state are higher than safe levels outlined by U.S. Environmental Protection Agency and World Health Organization standards. The average is 5.76 pCi/l, while the EPA threshold is 4.0 pCi/l. The postal code 43557 in the city of Stryker has the highest radon concentration at 141.85 pCi/l for this data set.

Trust Trudeau to think Canada deserves credit for fracking. Is there anything that guy won't say?

Carbon credits? For shipping liquefied fracked natural gas by GHG-emitting tanker ships across the ocean to Asia, where it will be burned, releasing more GHGs?


Why, doesn't that make sense Hugh? Let's remember that was Christy Clark's idea long before Justin ran with it.

Fracked LNG has a worse carbon footprint than bitumen.


Much of the leakage occurs at the wellhead, NPoV. Most of those sites are so remote that it becomes very difficult to properly monitor them, especially by public watchdogs. In the States they've used thermal cameras that can detect the cold plume of leaks. But for that temperature differential there's no way, especially from even a modest distanhce, to detect leakage of a gas that is clear, has no taste, no smell.