The Madness of Fish Farming 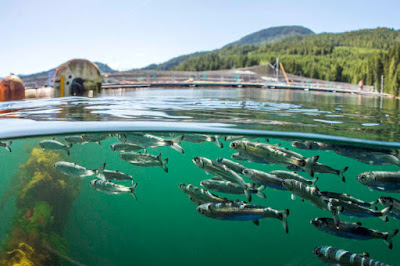 More than half the fish that reaches store shelves around the world today is farmed fish. There are some, quite a few in fact, who claim aquaculture will become increasingly critical to humanity's need for protein. That may be so, but...

Fish farms now surpass wild fisheries as the main provider of seafood on our plates, but combined risks from global heating, excessive use of antibiotics, a dependence on wild stocks for feed, and poor governance threatens the lucrative and fast-growing sector, warned Farm Animal Investment Risk and Return (Fairr), a $12trn-backed network.

Fairr’s report, Shallow returns?, shows an average growth in aquaculture of almost 6% annually, providing “significant” returns for shareholders, at up to more than 400% over five years. But the investor group warned that much of this expansion is based on high-density farming associated with environmental, social and governance risks. It accused the sector of “limited transparency” on these issues.

Aquaculture is both a significant contributor to emissions and is highly exposed to their impacts, the report said. Farmed marine fish production in south-east Asia, one of the largest aquaculture regions, is expected to drop 30% by 2050 due to rising sea temperatures and acidification of oceans.

Lettini said: “We thought that farmed fish would save our wild stocks in the oceans, but now it’s coming to the fore that we are using wild-caught fish to feed our farmed fish – and that is causing real problems.”

There's a snag to this argument. What do these critics imagine wild fish, such as salmon, eat while they're migrating through our oceans? Other fish, lots of other fish.

Last month Norway suffered its worst algal bloom in 30 years, with 8 million salmon killed so far. Algal blooms caused an estimated $800m in damage to the Chilean salmon industry in 2016, killing nearly 27m fish, about 20% of the country’s annual production, according to the report.

Aquaculture is a mess. There are serious pollution problems from its operations, everything from fish waste, the spread of disease to passing wild species, antibiotics, parasites (sea lice), to inadvertent escape of invasive species (Atlantic salmon escaping their pens into Pacific waters).

Then there's Asia and an enormous market that periodically hammers Canadian access to our own fish. Here's an example.  A few years ago a disease outbreak in Asian waters sent buyers across the Pacific to source Canadian prawns and shellfish. That drove the price so high that even upscale restaurants were pulling those items from their menus and ordinary folks couldn't afford them.

This raises the question of just who those vulnerable fish stocks belong to. Do they belong to Canada, the Canadian people, or do they belong to the companies we allow to catch them for sale to the highest bidder?  The commercial fishery did nothing to create those stocks they draw upon. If we hadn't restrained their catch it's quite possible there wouldn't be any left by now. This is a case of the public interest in conflict with private interests and, for the sake of our country, I think we should protect the public interest. That, sadly, is not the position of Ottawa's Department of Fisheries and Oceans. That needs to change.
Posted by The Mound of Sound at 8:45 AM

Various indigenous populations have farmed fish for a very long time without significantly damaging the environment. It is the greedy, industrial, high density fish farming that is so problematic. It is our corrupt politicians and captured bureaucrats who refuse to properly regulate who need to wear this.


I don't doubt that, Toby, but this problem goes beyond that. It reaches into a world where some 70 per cent of the world's poorest people are dependent on fish for protein. At sea we're witnessing the collapse of prime species as the industrial fleet "fishes down the food chain." In coastal waters we're seeing the degradation of habitat and native species through the introduction of foreign species in industrial operations. And it goes to the question of whether Canadian fish are an asset of the nation and its people or are vulnerable to those who can best afford them beyond Canada.

There are two many people in the world to feed. And not only that, every time a person breaths out, voila! All that CO2 adding to the awful mess of what I call artificial CO2, man made. Anyong