We'll All Be Singing This Tune Before Long 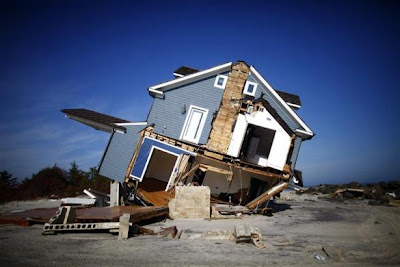 That retort was delivered by Ronald Jumeau, representing the Seychelles, to the U.S. negotiator at the now concluded Doha climate summit.   The developing countries actually reached an agreement - to throw more money (supposedly) at the poor and vulnerable countries most heavily impacted by global warming.

Only this time there's a difference.   Instead of funding adaptation measures, we're promising to pay them damages for injuries and loss we have caused them.   Only we're desperately hedging to find something, anything else to call it.   After all, we don't want to admit responsibility, do we?

The US had strongly opposed the initial "loss and damage" proposals, which would have set up a new international institution to collect and disperse funds to vulnerable countries. US negotiators also made certain that neither the word "compensation", nor any other term connoting legal liability, was used, to avoid opening the floodgates to litigation – instead, the money will be judged as aid.

There we go.   We'll just call it "aid."  And we'll pay it, if indeed we pay it at all, on some ad hoc basis to our liking.   And, if we run true to course, if you're a good little country you might get some but if you're a bad little country, the uppity kind, you'll probably be out of luck.

As I read Jumeau's remark I was left to wonder when our own, national emissions impact bill will come due?   Who will fund our adaptation costs here on the coast?   And who will compensate us for our losses?

Sure, we should all pay, perhaps an assessment by province, according to each province's population and per capita greenhouse gas emissions.  Oh dear, that would cause some problems.   Okay, sure, it's Alberta again.  Alberta, of course, seeks great wealth by extracting and exporting bitumen that's processed into a heavy oil, mixed with dilutents and then piped out of province.  It's so filthy, so carbon-intensive, that the stuff is refined elsewhere, keeping those emissions off the books.  But, as reported by the Pembina Institute, if Alberta were a country, its per capita greenhouse gas emissions would be higher than any other country in the world.

No problem, we'll just price carbon emissions wherever and however they're generated, from sea to sea to shining sea.   That would make sense, wouldn't it.   Equality, fairness, polluter pays.

Except the Harper junta sees things differently.  Generalissimo Estoban Harper himself would like to see some carbon, his province's coincidentally, treated differently than other carbon, your province's.  You see if we priced carbon emissions fairly, equally, it would be another blow to the conjuring act of subsidies and deferrals and outsourced emissions necessary to keep up the illusion of Athabasca prosperity.  And that simply won't do.

So we're going to have a sector-based emissions pricing policy and by "sector" we mean bitumen production versus everything else.  That will also probably delay implementation of carbon pricing and ensure it's kept well out of the petro-state danger zone.

And so it's unrealistic to expect major efforts to decarbonize our economy and our society.   Ain't gonna happen if we're to multiply bitumen production several fold and every major petro-party which unless you're Green includes yours seems onside with that.   And we can probably wrangle about carbon pricing a good long time, your grandkids might wind up negotiating that.

So when it comes to funding adaptation and paying to cover damage and loss from climate change, there are two scenarios, neither of them good for coastal Canadians.   One is that the fossil fuel fetish continues in which case adaptation and compensation costs will be politically inconvenient and swept under the carpet.  The other is that the fossil fuel bubble bursts sending the foreign oil companies racing out of town and flushing Alberta's economy straight down the toilet, leaving the province with uncollectable revenues,  debt and economic dislocation similar to that of the Third World.

It's time the Feds had a viable carbon pricing regime actually collecting hundreds of millions of dollars annually to fund climate change adaptation, especially for coastal Canada.   That means talking about what is happening and what is coming.   That means putting a price tag on it (independently audited, of course) that Canadians can actually see.   That means making polluters pay, all of us, and finally encouraging alternative energy solutions.

That means responsible government, something we haven't had for far too long.
Posted by The Mound of Sound at 9:02 AM

We should be discussing the implementation of a carbon tax nationwide, similar to that implemented in BC.

Of course the Alberta centric Harperites will have nothing to do with a carbon tax. But Canadians should be discussing it now so that it can be implemented after the Harperites' electoral implosion.

Gee, Anon, I wish I shared your optimism that all will be made right once Harper implodes. I don't trust the opposition parties to be very much better. They're already tied down to the narrative that the Tar Sands are a bountiful blessing for Canadians.

By Anyong.....I suggest you read this..... Go figure -- a carbon tax crafted right here at home
Well, some things you thought you'd never live to see. And one of them is an Alberta carbon tax, imposed by an Alberta government on Alberta energy companies, with the companies quietly nodding acceptance.
By The Calgary Herald March 9, 2007