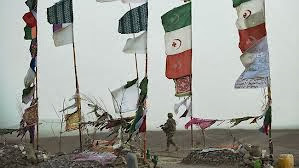 For decades Pakistan and it's powerful military intelligence arm, the ISS, has been meddling in Afghanistan's affairs.   The ISS was instrumental in backing the Mujad's battle against Soviet forces in Afghanistan and, after their withdrawal, in supporting the Taliban in their rise of power.   In the wake of the 2011 arrival of Western military forces to wage their own Afghan war, the ISS was seen as playing both sides of the fence - supposedly assisting ISAF and the Americans while covertly backing the Talib insurgency.  That sounds ridiculous but there are quite powerful forces driving Pakistan's apparent bi-polar foreign policy.

It took us more than a decade to learn the oft-taught lesson that it's easy to get into a war in Afghanistan and punishingly hard thereafter to extract yourself from it.  Kipling sort of captured the essence in this happy refrain:


When you lie wounded on Afghanistan's plain,
And the women come out to slice your remains,
Just roll to your rifle and blow out your brains,
And go to your Gawd like a soldier.
As Lord Roberts and Michael Gorbachev might have told us, when you get a chance to clear out of Afghanistan, best take it.  Yet the White House seems intent on hanging around if it can get Karzai to ink an acceptable Status of Forces agreement.  It's not clear just what the United States wants to achieve by staying.  It might hope to avert the collapse of the criminal enterprise that passes for a civil government in Kabul.  It could be some hope of keeping Afghanistan from restarting its unresolved civil war.  It might be an attempt to keep Russia and China from effectively controlling the "Stans" and their resource wealth.  There's been plenty of mumbling but no really coherent policy has emerged.
But maybe the United States should rethink its notions of staying.   Word is getting out that Kabul's intelligence agency wants to do to Pakistan something similar to what the ISS has been doing to Afghanistan.
The November 1 drone attack that killed Tehrik-i-Taliban Pakistan (the TTP or Pakistani Taliban) leader Hakimullah Mehsud, and the subsequent appointment of Mullah Fazlullah in his place, was an Afghan intelligence maneuver aimed at "ending the talk of talks" and recommitting the TTP to its insurgency, Pakistani counterinsurgency officials have revealed on condition of anonymity.

Chatter about possible TTP collusion with the NDS (Afghanistan's National Directorate of Security), long a concern for Pakistani intelligence, was not taken seriously till the New York Times' October 28 account of a US special forces raid on an Afghan intelligence convoy carrying Hakimullah's number two, Lateef Mehsud, as he was headed for secret talks in Kabul.

Pakistan's intelligence officials say the NDS is not acting alone, but is rather the lynch pin of a deeper proxy network involving Indian and even American intelligence agencies. That is why the NYT story's novelty was not so much in its content but its timing.

"If you look at it closely, you'll see the insurgency here suiting the Americans. The more the militants are engaged in Pakistan, the less hurdles the Americans face wrapping up in Afghanistan", said the intelligence officials.

"In Hakimullah's case, it was pretty clear that those who invested large sums in arming the TTP would not allow it to submit to a negotiated settlement. It makes no sense for the handlers, except in buying time for it to re-arm".