They're Beautiful, They're Rich and They're Betrothed. 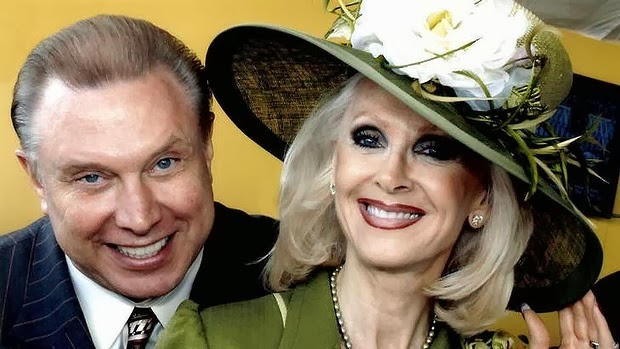 In a world where, these days, the rich and powerful seem immune to consequences, it's almost heartwarming to read of a couple of socialites getting their comeuppance.

He is 64-year old Winston Bontrager of Seattle.   She is 65-year old Australian expat and socialite, Pauline Anderson.   The beaming couple are engaged and, when this picture was taken, oh so happy.  That was before they were caught failing to declare about $24-million in income from property development deals in Washington state.

Pauline netted just over three years and a deportation order.  Winston, however, earned an 11-year, all-expenses stay in the Greybar Hotel for his efforts.
In The Observer this weekend the editorial laments the collapse of public accountability and the emergence of a class of wealthy and powerful people who can "get away with whatever they choose."  Hell, we've got a prime minister who thinks that very way.

How many facs lifts have they both had? They probably have spent enough money to build housing for the poor.

Yeah, that thought crossed my mind too. I'm sure they've had just as many as they wanted which was plenty.

It makes you wonder what Winston is going to look like when he gets out years from now.