Tell Us Why, Nigel 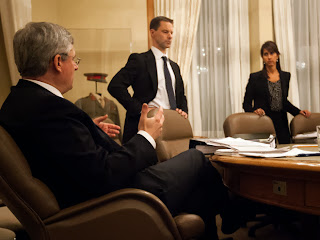 Why didn't even one of them tell their prime minister about something this potentially explosive?

Did it simply slip their minds, all their minds?  That might be plausible if Harper had surrounded himself with mental defectives but these guys were A-List talent.

Recall that there was already a scandal simmering in the media before the under-the-table-cash scandal erupted in mid-May.  The Wright-Duffy-Harper scandal was born out of the original residence/housing expenses scandal.  That was the one where Duffy denied he owed a dime and said his status and expenses had been cleared from the outset.

The prime minister knew all about that scandal.  He and Nigel Wright specifically met with Duffy where the prime minister told Duffy it wasn't a question of whether his claims were legitimate.   The prime minister said that the Tory base were a bunch of bumpkins and would never accept the optics of Duffy's pre-cleared expense claims.

Harper never said the claims weren't valid.  Neither did the Tory Senate leadership.  Neither did Nigel Wright.   Not at first, they didn't.  Not for years, they didn't.  No, it was only once the story was spoonfed to the media and the optics changed that there was even a hint of impropriety on Duffy's part.  And that was the moment that Mike Duffy was thrown under the bus, when Harper said, "this doesn't look good, pay it all back."  That marks the starting point of the PMO scandal.

You might want to remember this the next time you hear Nigel Wright's patriotic plea that he only coughed up the money out of a noble concern that the lowly taxpayers should not be out of pocket.   That is unadulterated mouth-crap.  Nigel Do-Right didn't give a damn about Duffy's expenses until daylight began to shine on the prime minister.  He's already told the cops he considered Duffy's expenses valid right up to the point where they became a political problem.   That would appear to fix the point in the timeline at which Nigel Wright begins to lie his ass off.  Whatever he says about events after that point needs to be viewed with real skepticism.

The prime minister would have us believe that, despite the story being front and centre in the papers and on the evening network newscasts, the ultimate prime ministerial control freak simply handed it all off to his top aides and went on to other business, everything but this scandal that was slowly scorching his party and closing in on his three "celebrity" Senate appointees.

It was at this point that the PMO sprung into action, erecting the Wall of Plausible Deniability around their prime minister.  Henceforth Harper would be kept out of sight, shielded behind Nigel Wright; Wright's 2-i-C, David van Hemmen;  the PMO Director of Issues Management, Chris Woodcock;  and the PMO legal top gun, Harper's personal legal advisor, Benjamin Perrin.   If you were the prime minister and you got the waft of burning flesh from the flames of scandal licking at your feet, who better to surround yourself with?

Wright has identified this foursome as the group within the PMO that had knowledge of his Duffy payout.   Yet he's minimizing what they knew and the role they played in the under-the-table scheme.  Almost as quickly as the wall was raised and the deed was done, Festung Harper was dismantled.  Perrin, his work done, hightailed it back to Vancouver perhaps unwisely popping up just once to deny having had anything to do with the Duffy payoff.  Within days of the under-the-table-cash/PMO scandal hitting the airwaves, Wright resigned/was canned. Woodcock and van Hemmen eventually followed suit.  The prime minister's office was sanitized of every individual who could implicate the boss directly.

So, look at the four who were instrumental in the under-the-table-cash deal - the chief of staff, the assistant chief of staff, the director of issues management, and the chief legal counsel - the Big Four - all in on it and not one mentioning a word of it to the prime minister and then, all four, at respectable intervals, scarpering off into the night.   If only there was musical accompaniment it might be a ballet, it was so plainly choreographed.   And yet Harper, supposedly, knew nothing until he read it in the funny papers.

Of course it wasn't just the Big Four who had knowledge of the affair or who played a role in it.  You have to throw in senators Marjory LeBreton, Carolyn Stewart-Olsen, Dave Tkachuk, and Irving Gerstein and toss in one or two officials of the Conservative Party including Arthur Hamilton.

So not only did Wright keep Harper in the dark, so too did van Hemmen, Woodcock, Perrin, LeBreton, Stewart-Olsen, Tkachuk, Gerstein and Hamilton not to mention every Tory that Duffy disclosed the scheme to - they all had to keep Harper completely in the dark.   Can you imagine that?  Listen, that's the very sort of thing that's known to happen all the time - in the alternate universe.

Nigel needs to tell us why he supposedly kept Harper in the dark.  Woodcock, van Hemmen, Perrin (especially Perrin), LeBreton, Stewart-Olsen, Tkachuk, Gerstein and Hamilton all need to tell us why they supposedly kept Harper in the dark. What was the protocol, the understanding?  Who said, "we do not discuss this with the prime minister"?   Because somebody in authority had to have said that or else Harper's lying, he knew.

So cpl. Horton, you've got a lot of work left to do.  You could start by asking these usual suspects to tell you "why."

.. its astounding MoS .. truly beyond belief..

This is this Harper Government's cowardly modus operendus & well earned 'legacy' .. They LIE !! Or clap in the Commons.. Every damn one of them! And worse.. they do not care about the damage to Canada or Canadians .. its all about their political, economic ideology entitlement club..
'Fiscal Conservatives' ? My arse ... !!

You're right.. Cpl Horton has his work cut out for him ..
Deposing Perrin, Wright, Arthur Hamilton, Jenni Byrne.. the rest of the unelected PMO jackals, senators, aides, wonks, enablers & misc scumbags .. and carving in towards the big bones, Van Loan, Flaherty, Oliver, Kent. Fantino, Clement etc and on the the big pig himself .. Harper

Maybe in 3 or 4 years.. some sort of truth will dribble from Ottawa.. Ok .. maybe 4 or 5 .. as these disgusting political pigs really know how to delay, destroy, obfuscate .. just as they rally have no idea of how to look after a country and its citizens ..

Will Nigel take the 'another boy for Jesus' route and lie for Harper in order to keep the Great Canadian Neoconservative Experiment alive (because everyone knows Jesus loved neoconservatives), or will he tell the truth?

It's astounding. Harper really thinks people will believe his claim.

There are shades of Richard Nixon's defense -- "I am not a crook!"

Charlie Angus said it best when he compared Harper to Mr. Magoo. LOL

To borrow a line from my favourite movie - 2001: A Space Odyssey - "It seems to have been deliberately buried."

Well, the sun is peeking over the horizon and sooner or later the Monolith is gonna start screaming...