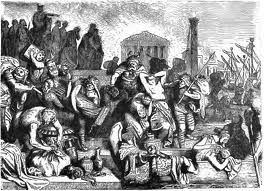 When I watch the Five Eyes gang at work, I am reminded of the ancient Germanic tribe, the Vandals, who in their day sacked Rome.  In the aftermath their name became synonymous with senseless destruction.

Five Eyes, this oh-so Anglo-Saxon, super secret intelligence coven, uniting the spy services of the United States, Great Britain, Canada, Australia and New Zealand, appears intent on covertly siphoning up every last iota of data to be had on Earth and beyond.

Whether it be Canada spying on Brazil, America monitoring Angela Merkel's cell phone, or Australia caught attempting to bug the phones of the president of Indonesia, we have come to resemble Latter Day Vandals on a spree of sacking even our allies' leaders and institutions.

We like to pour oil on the waters by claiming that everybody does it only that's not true and the countries and leaders we're so wantonly targeting know it.   What we're doing is a campaign of aggression.  Some top American generals have declared it may constitute an act of war.  This presumably doesn't apply when it's done by them, only when it's done to them.

I'm pretty sure the fact that this is being done by Mother England and her spawn (albeit only the white ones) isn't being overlooked either.

Do we really think we can do this with impunity; tear up the neighbourhood, carve donuts in our allies' front lawns?   Bear in mind how much the world has changed over the past thirty years.  America, our Head Office, is no longer widely seen as a force for peace but a threat to peace.  That's what happens when a nation turns to threats and use of military force in lieu of diplomacy as its principal instrument of foreign policy.  That's what happens when all those crazy Anglo bastards begin to equip themselves with stealth, "first strike" light attack bombers.

The Vandal comparison goes further, actually. After the Rome thing, the Vandals shipped out to northern Africa, where they established a colonial/imperialist state. All of them were rich, every Vandal family with their own estate, toil provided by darkies. The envy of the region. But it turned out their rule was extremely fragile; defeat in a single battle ended their kingdom for good, since it had no roots and the ruled weren't interested in having them back.

The comparisons write themselves.

Thanks for that, PLG. I had forgotten most of that history.

Aww...but there is a bye election in Toronto that just might to away with Mr. Trudeau and set Mr. Harper into a whirlwind. An honest female veying for the NDP, educated, savvy...and has the now how. Just might be just what this country needs...and to boot...she will not be afraid to challenge Mr.NDP...know who I mean?