What Was the 8-Digit Launch Code for America's Minuteman Nuclear Missiles? 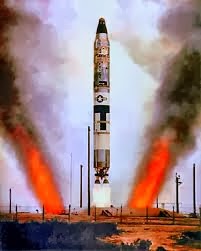 How about 0-0-0-0-0-0-0-0?   Not just one missile sitting in some lonesome silo in North Dakota.  The lot of them.  For twenty years, before more elaborate safeguards were put in place, punch in eight zeroes and you were away to the races.  You see, the idea was they didn't want to slow down the launch process by putting in random numbers to confuse the crews.

It was possible during those early years for the commander of America's Strategic Air Command to launch the whole bloody lot of those ICBMs.   From 1957 until 1964, that guy was uber hawk, General Thomas Power. 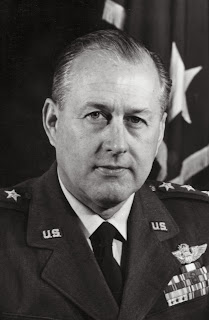 Beyond foreign seizure, there was also simply the problem that many U.S. commanders had the ability to launch nukes under their control at any time. Just one commanding officer who wasn’t quite right in the head and World War III begins. As U.S. General Horace M. Wade stated about General Thomas Power:

JFK directed that all missiles be retrofitted with PAL, Permissive Action Link, locking devices.
However, though the devices were supposed to be fitted on every nuclear missile after JFK issued his memorandum, the military continually dragged its heels on the matter. In fact, it was noted that a full 20 years after JFK had order PALs be fitted to every nuclear device, half of the missiles in Europe were still protected by simple mechanical locks. Most that did have the new system in place weren’t even activated until 1977.
Those in the U.S. that had been fitted with the devices, such as ones in the Minuteman Silos, were installed under the close scrutiny of Robert McNamara, JFK’s Secretary of Defence. However, The Strategic Air Command greatly resented McNamara’s presence and almost as soon as he left, the code to launch the missile’s, all 50 of them, was set to 00000000.
Oh dear.

Not quite as bad as it seems maybe. I heard that Nixon used to get drunk in the evenings, call up and order the military to nuke Moscow or whatever. They'd say "Yes, sir, Mr. President" and ignore him. People might have ignored General Power too, if he'd gone off the deep end.

The system has a certain inertia. People may like being on hair trigger alert and feeling macho about it, but actually pressing that button is something else. Ending the world is rather a big change to the status quo.

Still not the kind of setup you want for your world-ending missiles . . . He was really "General Power"?! I always thought "Dr. Strangelove" was a satire, not a documentary.

Kissinger intervened toward the end to ensure that a Nixon launch order would not be accepted. And, yes, Power does let you think of Dr. Strangelove just a bit differently.

I have read a bit about the indoctrination of America's nuclear missile crews and I don't think many of them would hesitate to turn their launch keys. I wish I didn't believe that.