WalMart doesn't like to pay its employees a living wage but it's happy to do a little begging on their behalf.  So the WalMart on Altantic Boulevard in Canton, Ohio set out bins in the store so that better off employees could toss a little something in for their less well off colleagues. 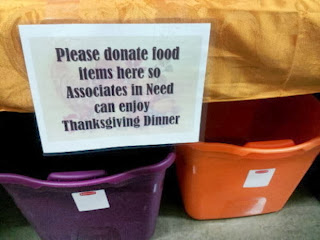 Kory Lundberg, a Walmart spokesman, said the food drive is proof that employees care about each other.

"It is for associates who have had some hardships come up," he said. "Maybe their spouse lost a job.

"This is part of the company's culture to rally around associates and take care of them when they face extreme hardships," he said.

Wait a second.  WalMart isn't taking "care of" anyone.  It's not WalMart goods going in those bins. It's stuff provided by other low-wage earning workers.
Posted by The Mound of Sound at 2:28 PM

It's a well-known fact but it bears repeating that the Walton's are the wealthiest family in the world. Their combined fortune approaches 150 billion US dollars.

Elliott, there will be a settling of scores. It may not happen in my lifetime but it almost certainly will in my children's time unless they're subjugated to some form of neo-feudalism. I only wish they were more conscious of what they're going to confront.

MOS...that is exactly what will happen. We cannot keep going at the pace we are while stealing peoples labour, and, with a continuing ludicrous population increase while the wealthy continue to have the mind set they do.

I have a sense, Anyong, of a looming social collapse. We're at the confluence of so many forces of change and, as a society, we seem to have lost much of our strength and resilience.

Whether it comes in the form of tipping points or breaking points remains to be seen but, as Jared Diamond explains in his book, Collapse, societies that self-destruct do so at their zenith and it occurs quite rapidly. We have used technological conjuring tricks to allow us to go well past our safe limits socially, economically and environmentally. When one wobbly leg goes, the rest will probably follow fairly quickly.