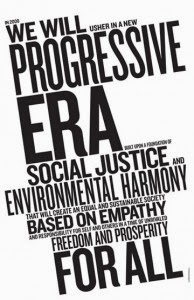 There are plenty of those who consider themselves Liberals or even New Democrats yet aren't faintly progressive.   The inescapable fact is that one can't be corporatist and progressive.  The two are mutually exclusive although corporatists will often try to pay lip service to progressivism, every now and then tossing a bone to the plebs.

Progressivism has manifested itself in different forms at different times in response to different conditions.   Knowledge lies at the heart of progressivism which is why it is sometimes thought the Age of Enlightenment was the birthplace of progressivism.   Among its earliest champions were Locke, Voltaire and Newton. Their weapons were reason, logic, skepticism and the scientific method.   These they wielded to gore the forces of tradition, belief and privilege.  The Enlightenment underpinned the U.S. Bill of Rights and the French Declaration of the Rights of Man and of the Citizen.

Progressivism is forward looking.  It embraces posterity as an integral component of social advancement.  It looks to build a better future for generations to follow.

The dawn of the 20th century saw contemporary progressivism catch fire in the United States in reaction to the stifling concentration of power - economic and political - in the hands of the few.   One of its great champions was Theodore "Teddy" Roosevelt.   His powerful restatement of progressivism is contained in his Square Deal speech delivered in August, 1910 at Osawatomie, Kansas.  I read this at least once a year or more often as needed to recalibrate my political-moral compass and I commend that to every progressive.   Here are some excerpts to illustrate what progressivism should mean to us today.


Of that generation of men to whom we owe so much, the man to whom we owe most is, of course, Lincoln. Part of our debt to him is because he forecast our present struggle and saw the way out. He said: —

“I hold that while man exists it is his duty to improve not only his own condition, but to assist in ameliorating mankind.”

If that remark was original with me, I should be even more strongly denounced as a Communist agitator than I shall be anyhow. It is Lincoln’s. I am only quoting it; and that is one side; that is the side the capitalist should hear. Now, let the working man hear his side.

“Capital has its rights, which are as worthy of protection as any other rights. … Nor should this lead to a war upon the owners of property. Property is the fruit of labor; … property is desirable; is a positive good in the world.”

These are things that will not be given to us without a fight.  Roosevelt summed it up a century ago:

We cannot afford weakly to blind ourselves to the actual conflict which faces us today. The issue is joined, and we must fight or fail.