The Three Stooges of the Tory Senate

Top Tory senators LeBreton, Tkachuk, and Stewart-Olsen have all had an initial grilling by the RCMP and let's just say they didn't score straight A's.  In fact, they came away looking pretty roughed up.

In his court filing, RCMP Corporal Greg Horton criticized some Conservative senators for their hazy memory and, in case of Carolyn Stewart Olsen, answers that are “not consistent with the facts.” Ms. Stewart Olsen declined comment on Thursday, but two other senators fought back.

Marjory LeBreton, the government Senate leader at the time the Duffy saga was unfolding, rejected police allegations that she provided evidence contrary to what e-mails show.

“When I met with the RCMP, I answered all questions willingly, honestly and to the best of my ability,” Ms. LeBreton told The Globe in a statement. “… I cannot answer for e-mails I was unaware of or e-mails where the claim to communicate certain information to me was not followed through on.”

Police also detailed an interview with David Tkachuk, a Conservative senator who chaired the subcommittee overseeing the audit of Mr. Duffy’s expenses. He called the police document, which said he couldn’t recall several details, “a work of fiction.”

“This [court filing] is what I call a political document by the police to get further information. So they’re going to gussy it up a little bit. It’s a work of fiction. There’s no proof to any of the allegations they make,” Mr. Tkachuk said. RCMP are seeking his e-mails, which he says he’ll provide.

Mr. Tkachuk reiterated he knew nothing about Mr. Wright’s cheque, and that the Prime Minister’s Office, of course, had a role in dealing with such a major issue.

If they haven't already, the three of them should all lawyer up at this point.   There's no concealing it any more, they're looking at the real prospect of prosecution.   They may compound that with obstruction charges if they've lied to the investigating officer, Greg Horton. 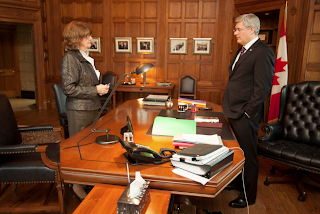 Marjory LeBreton is not known for her smarts.  She's actually considered something of a 5-watt bulb.  She became Senate leader through seniority and obedience.  Marjory has always done as she's told.  Word has it she's unable to come to grips with the reality that there's a record of much of what she did.  There's even a rumoured recording of what she imprudently said in a heated phone conversation.  Her excuses are so lame but that's probably the best she can come up with.

Marj has outlived her usefulness to the prime minister.  Like Nigel Wright, she resigned her prestigious post - or was she fired? 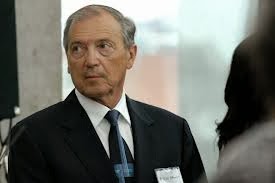 Tkachuk, well he's a veteran of the Grant Devine government in Saskatchewan, arguably the most corrupt provincial government in Canadian history.  He was Devine's principal secretary and was likely on a first name basis with the half of the Devine caucus that wound up in the Greybar Hotel.

Smart move, Dave.   Accuse the investigator of playing politics.  Dismiss his report as a "work of fiction."  That's going to go down real well, Dave.

Former chair or deputy-chair of a slew of Senate and Conservative party committees, Dave too has now resigned. 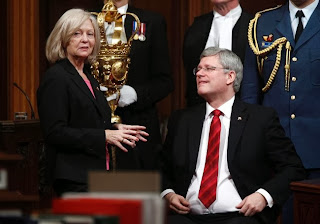 One of those three is probably getting pretty close to rolling on the other two and I'll bet they all know it.  Harper knows it too.
Posted by The Mound of Sound at 10:59 AM

Let us not forget Comeau who “was named chair of the powerful committee charged with overseeing spending in the red chamber and the Senate's administration” recently is also “retiring”........ seems to a lot of cons bailing like rats from a sinking ship!

I wonder how long it'll be before charges are laid? It sounds like this has grown much too big for Commish Paulson to cover for Harper et al.

I can't help thinking that someone is going to dime on everyone else. The nearer you get to disaster the more likely someone will turn. As the Mob analogy goes - loyalty only seems to travel up in the Harper regime. Eventually someone will go rouge and then the preverbal shit will really hit the fan.

.. you've covered the idea in other commentaries & posts.. the idea that things do not add up at all ..

.. there appears to be a stalking horse at work.. an 'eminence grise' or fine hand behind the curtain.... an oblique attack .. someone or someones .. have gone renegade .. the long knives are coming out..

I smell Harper turkey.. slow roasting.. for Christmas...
and already, the small cuts.. n samples.. to taste and savor are happening ..

The next drumstick may be Benjamin Perrin .. (a Lawyer lawyering up!).. but Stephen Harper can quack 'that's nothin.. darn right' .. Benji screwed me over.. ! Wah !

How deep the waters? Mr Harper ???
As your ship sinks.. in disgrace to oblivion