At Least Someone is Pushing Back 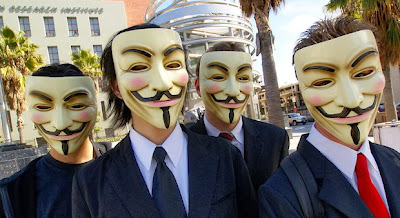 The hackers exploited a flaw in Adobe Systems Inc's software to launch a rash of electronic break-ins that began last December, the FBI said in a memo seen by Reuters, then left "back doors" to return to many of the machines as recently as last month.

As I have read about this I have wondered what to make of it.   Of course hacking into government computers and lifting data is against probably several laws.  That makes it a crime.  Yet it's a crime with a David versus Goliath aspect along with just a touch of Robin Hood taking down the evil Sheriff of Nottingham.

I'm starting to accept that this whole crime & punishment stuff is really not all it's cracked up to be.  I can't say that I approve of what Anonymous is doing but I know that today I can't condemn them either, certainly not on something as flimsy as the FBI's say so.   Not after WikiLeaks.   Not after the NSA Prism scandal.  Not after we embraced CSEC.  Not after Five Eyes.  No, the only way any surveillance state remains in business is by deception and concealment and that mission starts the moment they open their mouths to 'warn' the public.

Sorry but that's part and parcel of the modern democratic deficit, the rise of the corporatist state.  I'm willing to accept that Anonymous may be committing crimes (as defined, conveniently, by the state victim) but I'm not at all sure they're not committing those crimes on my behalf, on behalf of all of us.

And, when it comes right down to it, at least someone is pushing back.
Posted by The Mound of Sound at 8:57 AM

Email ThisBlogThis!Share to TwitterShare to FacebookShare to Pinterest
Labels: Anonymous

Yup. Doubt there was any good reason for any of the stuff that got hacked to be unavailable to the citizens in the first place. Lots of bad reasons though.

It's ironic, PLG, how the many lose their privacy to the powerful few who, in turn, constantly fortify their secrecy.