So That's Why Men are Pigs and Women are.... 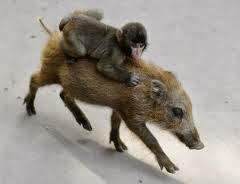 Well, women have evolved.   Men, however, are mainly still pigs.  It turns out that might be our evolutionary steady state.

Turning the theory of human ancestry on its head, Dr Eugene McCarthy — one of the world's leading authorities on hybridization in animals from the University of Georgia has suggested that humans didn't evolve from just apes but was a backcross hybrid of a chimpanzee and pigs.

His hypothesis is based on the fact that though humans have many features in common with chimps, there are a lot more that don't correspond to any other primates. He then suggests that there is only one animal in the animal kingdom that has all of the traits which distinguish humans from our primate cousins.

Another suggestive fact, Dr McCarthy says is the frequent use of pigs in the surgical treatment of human beings. Pig heart valves are used to replace those of human coronary patients. Pig skin is used in the treatment of human burn victims. "Serious efforts are now underway to transplant kidneys and other organs from pigs into human beings. Why are pigs suited for such purposes? Why not goats, dogs, or bears - animals that, in terms of taxonomic classification, are no more distantly related to human beings than pigs?," he said.

While I'm aware that we're often considered to have surprising similarities to pigs, and that's fine with me 'cos I like pigs, this is still pretty ridiculous. Successful breeding between chimp-ancestors and pig-ancestors? Not only that, but non-sterile offspring, themselves presumably interfertile with chimps? Shyeah, right, and monkey-pig hybrids will fy out of my butt.

Be easy to test nowadays. Do a bit of sequencing and try to find pig genes in humans. If they're there, we can talk. But just "well, there's an odd resemblance so we must be related"? Geeze, McCarthy, you're a scientist--do some science or go home.

Actually,PLG, I think science hAs found great commonality between human and pig genes. He's supposedly an eminent genealogist. I somehow doubt he'd expose his reputation to the sort of thing you've raised, do you?