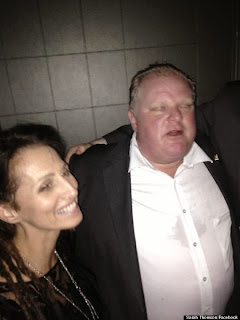 If that argument has any credence, it sort of stops at the janitorial level.   This is not to be elitist but the higher up you go, the greater the discretion that is required of you.   Sorry, Rob, a simple apology doesn't cut it at your pay grade.

Senior positions at any institution, particularly government, carry weighty responsibilities.  At this strata, people are involved in policy-making and planning. They're entrusted with confidential information and discretionary powers that can be extremely valuable to outsiders and hangers-on.

Top tier inebriates invariable attract people like those with whom Rob Ford has been photographed associating.   They don't see him as a fellow partier, they see him as weak and vulnerable.   These are people who are masters at exploiting weakness and vulnerability and rarely pass up a golden opportunity like the mayor of Toronto.

That video, the one we have yet to see.  Who knows what they had in mind to do with it?   They were certainly keen at one point to flog it for a six-figure price to outfits like Gawker.

When you've got a guy who freely consorts with known criminals and, in their presence, drinks himself into a stupor and ingests what are truly hard drugs, how difficult do you think it would be to pry information out of him?  We saw from that video that Rob Ford really vents when he gets wasted and someone in that state will literally spill their guts if handled right.

Ford's controversial relationship with the mystery woman, Alana, whom Ford staffers suspected to be a prostitute and with whom he is said to have smoked marijuana has the makings of the classic, time honoured "honey pot" in which a pretty young thing is employed in a blackmail operation.

The fact is we have no idea how much damage Rob Ford has already caused, what information has already been compromised.   It is bad enough that he has embarrassed, no humiliated, the largest city in Canada and its citizens, but it's inexcusable that he has almost certainly betrayed his office and his city.
Posted by The Mound of Sound at 10:47 AM

yes indeed, well written Mound. I think he would have gotten off lightly if it was just the drugdealers using the vid. But there are soo many other people, corporate types, spies, corrupt whitecollar folks who would have ( and probably did) play Mr Rob Ford. Having the goon squad run around town and beat a few heads in might work with the drug dealers,...but not with the higher echelon of exploiters.
he needs to go...for that reason alone...hes a security risk. Surely the province realize that...and Im certain harper does.

In practice of course it's the reverse--the lower you are on the totem pole, the more you actually have to take responsibility for your misdeeds. There's no way most of us at normal pay scales would be keeping our job after getting caught at a fraction of his screwups.