If This is Fact, We Need to Rethink Our Bitumen Policy, Pipelines Included. 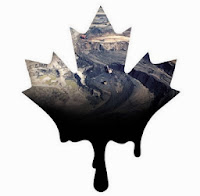 Word is coming out of the discovery of a truly massive, shale oil field in Australia that's expected to produce from 233 upwards to 400-billion barrels of crude oil.   That's crude oil, not bitumen.

Even at the lowest range, 233-billion barrels considerably exceeds Canada's 175-billion barrel petro-reserves, most of which are high-cost, high-carbon bitumen.

As Richard over at Canadian Trends points out, the recent accord with Iran is compounding the recent slump in WTI crude, magnifying Alberta's "carbon bubble" problems.

What impact will the Coober Pedy bonanza have on Canada's high risk energy resources?   You may think back to when Athabasca, on the verge of imminent development, was abandoned cold when conventional oil was discovered at Prudhoe Bay, Alaska.

Australia has grown enormously wealthy peddling its vast coal reserves to China and it's inconceivable that climate-change denier and newly-minted prime minister Tony Abbott will hesitate to get his country's shale oil sailing off to China also.

It's time for this country to take a sober look at our exposure - economically and environmentally - from our tenuous bitumen bounty.  Coober Pedy could easily cause Athabasca to blow up in our face.
Posted by The Mound of Sound at 9:33 AM

Part 1 of the answer to your questions: http://canadiantrends.blogspot.ca/2013/11/oil-and-economy-understanding-risks.html

From what I can tell, Linc has yet to drill a discovery well on their Coober Pedy acreage. Those oil volume estimates are as yet unproven. It will be huge if the petroleum system works the way they hope it does, but those reserves can't be booked until Linc (or someone) drills a well and proves that the oil is there.

Look at their share price. It jumped from $0.80 to $3.00 shortly after the independent report came out touting the 233 billion BBLs. It's come back down to $1.00 since then, mostly because Linc hasn't drilled a discovery (yet).

This isn't to say that a huge oil field (and/or a series of moderate to small fields) in the Arckaringa Basin isn't possible. It certainly is. It just hasn't been proven to exist at this point (unless I'm missing some information). They should be reporting the risked reserve estimates, not the unrisked estimates.

I would imagine the Federal Government is in a tail spin at the moment. The US has said just as fewe moments ago, it has more oil than it needs at the moment and therefore doesn't think it will need Canada's bitumen. Also since their oil isn't bitumen, they will not produce as much air pollution. Way to go.

Thanks for the information,Briguy. Anyong, do you have a link for that?

The tar sands is likely to lose, ahem, steam within not too many years IMO.

This article points out that many bits of the tar sands currently being exploited actually use more energy in the harvesting than you get from the resulting crude. And of course since the easier places get exploited first, the proportion will only get higher.

This is a horribly ludicrous situation. But it also means these are only economically viable right now because the price of natural gas is so much lower than the price of oil. But IMO that is unlikely to last--the low natural gas prices are due to the fracking boom, but the fracking boom is not a long term thing; fracking fields become exhausted very quickly and the reserves involved are probably much smaller than boosters generally claim.

So, fairly soon I think the price of natural gas is going to come back up. When it does, many, perhaps most, tar sands deposits will become money-losers and the remainder will be far less profitable than they currently are.

It was on CBC radio yesterday. Anyong

Can you give me any more on that, Anyong? Who said what? Was it in the context of the Keystone XL pipeline? Was there some suggestion of the U.S. market for Athabasca bitumen closing down?

There are important questions because they will bear on how determined Ottawa will be to get pipelines carrying bitumen to the west and east coasts.

Oh yeah . . . counterpoint on US demand: That US oil glut is also from fracked oil; I don't think it's going to last either, so they'll be wanting the tar sands again soon enough. But by then they won't be economically viable.