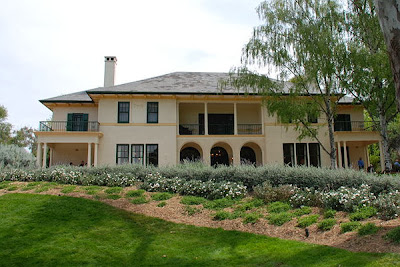 Love is literally blossoming between 24 Sussex Drive and The Lodge in Canberra, the respective residences of Sideshow Steve Harper and his newly fledged Australian mirror image, Tony Abbott.

Abbott wasted no time in repealing Australia's carbon tax, a move that earned him kudos from the Harper regime that proceeded to commend Abbott's move to the rest of the industrialized world.

But, as Harper has demonstrated, thwarting action on carbon emissions is only the first merit badge to be earned on the path to true Eco-Bad Boy status.   There's an entire eco-system to abuse, science to be marginalized and silenced.   There too, Tony Abbott, is wasting no time.

Australia’s environment laws are suffering a “death by a thousand cuts”, conservationists have warned, after the government unveiled plans to amend the key legislation that protects endangered species.

Greg Hunt, the environment minister, has put forward a bill that would mean he would suffer no recourse if he approved major developments without taking expert advice.

The bill adds a clause to the Environment Protection and Biodiversity Conservation Act which states that a decision to approve a development will not be invalid “merely because the minister failed” to receive “relevant approved conservation advice”.

The Coalition’s change would mean this, and similar, legal challenges to approvals would fail.

While the environment minister will still be required to consider expert advice, there will be no penalty for failing to do so.
Posted by The Mound of Sound at 10:35 AM