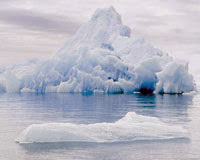 That's the formula for the militarization of the Arctic Ocean.  U.S. Defense Secretary, Chuck Hagel, said as much in a slightly different fashion.

Hagel said the U.S. military would adapt infrastructure and capabilities “at a pace consistent with changing conditions.”

Vlad Putin has recently announced plans to up-muscle Russia's forces in the Arctic to defend Russian sea lanes against what he perceives to be potential threats from other Arctic nations.

Even China, not itself an Arctic nation, has stated its intention to establish some permanent, military presence in the Arctic to protect Beijing's interests in the sea lanes and exploitation of Arctic seabed resources.  Did you get that, "resources"?  China, by the way, operates the largest, non-nuclear icebreaker in the world and plans for armed sister-ships are said to be in the works.