Rampage of the Right

It's ongoing in Canada.  It's happening in Australia.  It's well underway in Britain.  In the Conservative ruled Anglosphere, governments are busy dismantling environmental protections.

The focus, at the moment, is on Britain where Conservative prime minister David Cameron is about to shred 80,000 pages of environmental protections and building codes.

Among the regulations to be watered down will be protections for hedgerows and rules about how businesses dispose of waste, despite Cameron's claims to lead the greenest government ever.

Addressing the Federation of Small Businesses conference, Cameron will argue that the new rules will make it "vastly cheaper" for businesses to comply with their environmental obligations.

The government also plans to scrap many building standards relating to things such as the size of windows and demands for renewable energy sources, saving builders about £500 for each new home.

"We have trawled through thousands of pieces of regulation, from the serious to the ridiculous, and we will be scrapping or amending over 3,000 regulations – saving business well over £850m every single year. That's half a million pounds which will be saved for businesses every single day of the year," Cameron will claim.

"We need government to be a better servant – and customer – of our small businesses and to make sure that entrepreneurs' voices are heard at the top table."

It's believed Cameron's deregulation will clear the way for a wave of shoddily constructed, mini-homes.

The average British home has shrunk by 40% in the last 80 years to only 76 sq m – compared with 115 sq m in the Netherlands and 137 sq m in Denmark. Even famously compact Japanese homes average at 92 sq m. National minimum space standards, common elsewhere in Europe, are what is needed – not carte blanche for developers to make homes even smaller than a London Tube carriage. 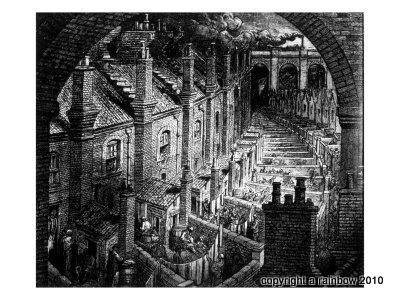 Cameron's logic goes that reducing regulations will somehow “free up” benevolent house-builders to bring forth the long-awaited bounty of new homes, the provision of which has fallen to the lowest level since the 1920s. But red tape is not what is holding them back. Research has shown that house-builders are sitting on hundreds of thousands of plots of land that already have planning permission, a game of “land banking” that forces values into the stratosphere. In turn, these artificially inflated land prices lead to more units built on each site, meaning smaller homes with non-existent gardens and squeezing out any hope of design quality.

Who knows?  Maybe the Brits are nostalgic for a return to industrial revolution slum housing.  Besides, it's so convenient when you live next door to the foundry.

The Cameron government claims the bonfire of building and environmental regulations is the result of overwhelming public demand for regulatory streamlining.  The Guardian's Damian Carrington says that's bollocks.

Unconvinced this is all utterly benign? Blame yourself, because according to business minister Mark Prisk, it was you who wanted all these changes: "The comments made on the website, by people who deal with these regulations every day, are what has driven this whole process, and I'm pleased that so many people have taken this chance to have their say."

Except that my analysis shows that 97% of the thousands of public responses on the RTC website demanded stronger protection or no change in the rules on air pollution, wildlife and landscape management. Futhermore, a robust opinion poll from YouGov/Greenpeace shows that when asked what you think about the current safeguards that protect Britain's wildlife and countryside, only 4% said they were too strong, with ten times more saying they were too weak, and 37% said they were about right.

Ah, there's that other rightwing ploy - when pressed, just make shit up because you only have to convince those who are already happy to eat whatever you dish up for them.

It is at times like this, Mound, that I am glad I have a ready-supply of bourbon on hand.

See, they're doing something for you after all, Lorne, although I suppose it's really for the whiskey lobby.