Should We Be Celebrating History We Don't Understand? 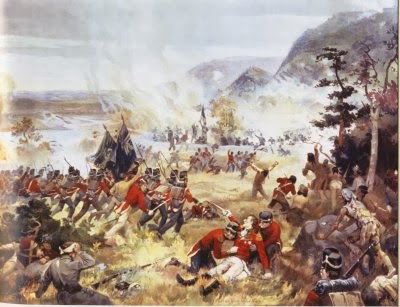 Last week the National Post ran C.P. Champion's impassioned argument that the War of 1812 should be venerated as part of Canada's 150th anniversary celebrations in 2017.  Champion took full advantage of the opportunity to bash "progressives" for critiquing Harper's obsession with the war and for being unpatriotic louts in general.

The op-ed bothered me enough that I responded, rejecting Champion's assertion that progressives did not appreciate the significance of the War of 1812 to our country.  That's utter nonsense.

What really bothered me, however, was that Harper's 200-year old triumphalism was based on a 6th-grade, utterly simplistic view of that very important war.  The War of 1812 was a very complex undertaking.  The United States wanted to go to war against Britain but realized their navy wasn't remotely up to the job of taking on the Royal Navy at sea.   Britain's colonies to the north were the default option.  That's it.

When the Americans declared war there was no consensus on actually conquering and annexing Canada regardless of what the declaration of war stated.   Most of the political classes saw us as a useful bargaining chip to be traded back to Britain in exchange for concessions in trade as well as the native lands on their then western frontier.

It was something of a sectarian war in that it was the doing of the Republicans and largely unwanted by the northern state Federalists.  The northern states, for example, continued to allow trade with the Canadas.  The British forces were sustained by foodstuffs bought from American suppliers.  This north-south rift opened a window into divisions that would, in part, erupt half a century later in the American Civil War.

Britain had well-developed plans to cede Upper Canada, Ontario, if need be while they finished off Napoleon but to defend Quebec at all costs.

I agree with Champion that this war was fundamental to the history of Canada but I question the sincerity of those, like Harper and Mr. Champion, who take such a narrow and inadequate view of it.  I'm convinced that taking a grade-school approach to the War of 1812 yields nothing beyond childish triumphalism.
Posted by The Mound of Sound at 10:53 AM

Excellent point. As a historian, I too am dismayed by the simplistic use of history for propaganda purposes.

I'm no historian, Michael, but surely, as you suggest, when you launder the historical narrative you do turn history into propaganda.

When has history not been reduced to the simplest of forms? When has it not been an "us" versus "them"?

Of course Harper has an erection for the War of 1812 - it is far away in the passage of history to let him re-imagine it and romanticize it.

It is indeed important to Canada but nothing more than a footnote to European history.

History and Science are not priority topics for religious fundamentalists like Harper. The Bible has all the history and science they need.