So Much For the Arab Spring. Egyptians Tossed Back Into The Pressure Cooker of Unrest. 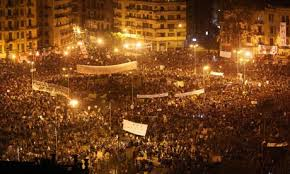 Consider it a return to the bad-old days.  Egypt's military and financial elites have retaken control of the country.

The return to power of the political and economic class aligned with the regime of former strongman Hosni Mubarak is spurring billions of dollars in investment and assistance from Gulf governments and businesses that approved of the Egyptian military’s ouster of the Muslim Brotherhood last summer. Now, the government is harnessing the funds to boost growth — at just 2 percent in 2013 — through a multi-billion-dollar stimulus package and aiming to bring down its whopping budget deficit.

But the resurgence of the moneyed elite of the Mubarak period is also raising fears that they will again preside over an economic order that, despite an expanding economy in the final years of the autocrat’s presidency, encouraged the crony capitalism and stark inequality that helped stir the 2011 revolt.

The commingling of business and politics, often at the expense of a population that remained trapped in searing poverty, cemented widespread resentment of Egypt’s decades-old authoritarian system. And now some businessmen and officials implicated in post-uprising corruption probes are again in positions of power and influence, including in the cabinet appointed by the military last summer.

I don't know what the next Arab uprising is going to look like but it's a safe bet that it won't resemble the Arab Spring.  Egypt is staring into a nightmare confluence of demographic, population, economic and environmental challenges.   Even access to the Nile waters is no longer secure.   Round Two will be a revolt and this time the military won't look on from the sidelines.
Posted by The Mound of Sound at 12:14 PM

I understand there is a very high rate of unemployment especially among the young people. That was one of the reasons for the first uprising.

Sadly it continued under elected government. Now back to square one.

I understand U.S and other Western nations did not like a president who belonged to the Muslim Brotherhood. Maybe west wanted a regime change. Nonetheless it is a very sad situation.

There were a lot of people here, LD, who had this delusional fantasy that ousting Morsi would open the way for a secular democracy. Within days of Morsi being toppled the Egyptian generals moved against al Baradei, the moderate, who was forced to get himself and his family to safety in Europe.

The Saudis are delighted at the outcome, so is Israel. Washington may not like it but hasn't shown any willingness to alter the status quo.

So the lid is back on the pressure cooker and the heat is set to 'high.' Now we just have to wait and see.

I never trusted the so-called 'Arab Spring'. The only revolution that has had any staying power in the past 10+ years is the Bolivar inspired changes in South America. It's one thing to change autocratic rulers but it's a completely different thing to wrestle control over one's economic destiny from the corporate and financial elite.

Rarely are revolutions successful from the outset. And the notion of some successful transition to a secular democracy in the Arab world is even more remote.