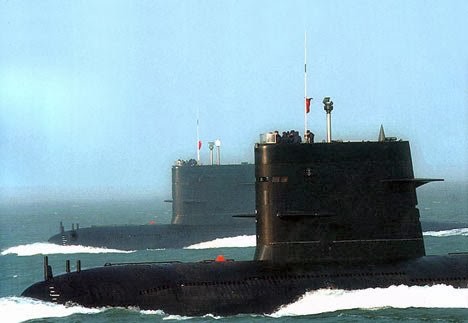 For some reason, Canada, with the world's largest coastline bordering three of the most important oceans on Earth, is fielding a fleet of four, 28-year old submarines purchased second-hand from Britain's Royal Navy.  When or even if we'll ever have four operational submarines remains to be seen.  There's some suggestion our subs may have a role to play in Asian waters in support of America's "pivot" to Asia.

If one of the Royal Canadian Navy's undersea craft ever does make it all the way across the Pacific to Asia, it will be sailing into a rich, submarine soup.   From India to China, the region is awash in submarines and more are on the way.

For example, North Korea operates 60 to 70 subs, most of them older Soviet boats.  South Korea has 15, the best from its Hyundai boat yards.  Vietnam is about to take delivery of its second, high-tech conventional sub from Russia with three more on order.

The Philippines doesn't have any subs but is shopping for at least three.  Pakistan has 5-French designed subs and is looking to build its own nuclear-powered submarine.  Indonesia has 7 boats including three on order from South Korean shipyards.   The city state of Singapore has four Swedish subs with three new German boats on order.  Malaysia operates two French, Scorpion-class subs.  Myanmar is said to be ordering two Kilo-class subs from Russia.  That leaves Thailand which currently has no subs.

Let's not forget Australia which also  considers those waters to be part of its area of operations.  Australia operates 6 Collins-class subs and, like so many others, is looking for new boats.

Leaving aside the Russians and Americans, that's over 200-submarines, most of them far more modern and capable than the Royal Navy castoffs Canada operates when it can actually get them to sea.  The idea of sending an old Canadian sub across the Pacific to patrol the waters from the Indian Ocean to the South China Sea would seem preposterous.

This is not to say the Royal Canadian Navy doesn't need a submarine force.  It does, and with the Arctic Ocean turning ice-free we need boats that can operate in the far north.  The Brit boats might be useful for training but that's about it.  Time we too began looking for something a little less shopworn.

After ww2 Canada had the second largest navy in the world. They threw most of that away. Canada built the
best fighter aircraft in the 50's. Dief the chief cancelled that program. We cannot even buy helicopters to suit our needs. Then they buy these
crap subs, and plan to buy F35 crap. Even in B C we can't build our own ferry's. We could do so much
more but lack the will, or desire. What has happend
to all the ship building that Harper promised?

Canada could purchase new, extremely efficient, "conventional"
subs made to order in Germany for less than they paid the Brits for the crap they bought from them.

(Interesting note - conventional subs are quieter than nuclear when submerged.)

Our political leaders are total a-holes.

UU - that's absolutely true. The new German boats are vastly ahead of the ex-Brit boats. The RN 'retired' them prematurely for a reason. Now they have 28-years of age on their hulls which is a serious problem for any submarine.

Not only are Canada's subs a political and national embarrassment, they are uuuugggglyyy! One afternoon last summer I was out on my bike on the seawall adjacent to Burrard Inlet when I rode around the corner of the convention centre and staring me in the face docked at Canada Place was not a lovely cruise ship but one of these hideous tubs. Honestly it was so ugly that I could not bear to look for more than a second or two. I didn't ride along the north side of the peninsula for a good week after that. Ugly, ugly ugly boats! They are the AMC Pacer of submarines.

Canada has a long and undistinguished history of submarine warfare. You just have to read up on the acquisition of CC1 and CC2, our first "real" subs, to understand that. It was the under the Conservative majority government of Robert Borden that these boats were acquired, at an inflated price no less, only to be scrapped one administration later in 1920.

Perhaps if we bought cheaper and more able fighter jets instead of the abortive F35's we could afford a few new submarines. Maybe we could even build a few of the damned boats ourselves. We have pretty good ship yards around these parts.

Given our long long coastlines it makes me wonder why we do not have actual working patrol submarines that we can be proud of. It wasn't that many years ago either that West Edmonton Mall had the largest fleet of working submarines in Canada. At least we had those, and they worked!

I do tend to agree that we should consider building our own boats for the RCN. The German firm, Thyssen, has done licence-build deals for other countries and they're excellent boats.

For starters, we need to explore Canada's need for a submarine force. What role can subs play in Canada's defence and how many of what type are needed to perform that role. Right now we're just dabbling and that leads us to make some pretty bad decisions and squander ridiculous amounts of money.