We Dodged a Bullet - This Time. 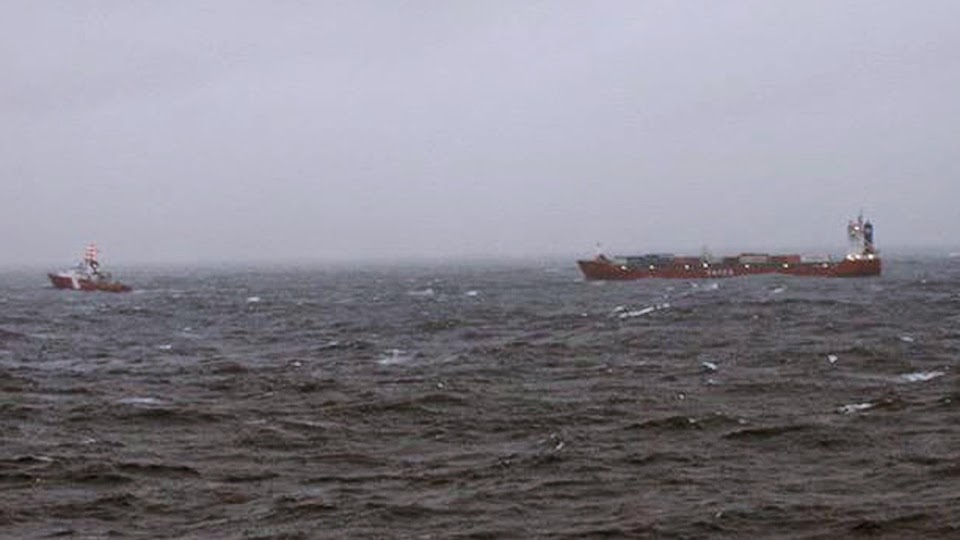 The floundering of the Russian bulk carrier, Simushir, is bound to become some sort of benchmark for the debate over tanker safety off the British Columbia coast.  It shouldn't.  Here's why.

Simushir isn't a supertanker.  It's a bulk carrier.  Its manifest does include some bunker oil and some diesel but there's also mining equipment and "chemicals" in its holds.

The Simushir and a supertanker - apples and oranges.

A supertanker catastrophe isn't likely to occur where Simushir floundered.  The Russian cargo ship wasn't in the treacherous waters of Hecate Strait, Dixon Entrance or Douglas Channel where the supertankers of Harper's dreams will operate.

The Simushir was drifting in the relatively benign waters on the seaward side of Moresby Island.  It's the equivalent of a kids' waterslide at a community park compared to white water rafting through Hell's Gate.

A potential, even if relatively modest, disaster was avoided when the Canadian Coast Guard coastal patrol vessel, Gordon Reid, managed to tow the Russian ship out to sea, 40 kms. from the coast of Moresby Island.  The Reid was just enough ship to tow the bulk carrier but, even then, it lost all three of its tow lines in the process.

In the well-documented, diabolical storms that rake the Hecate Strait, with an actual VLCC in distress, the Gordon Reid would probably be reduced to assisting survivors.

Bunker oil isn't Dilbit - diluted bitumen.  Bunker oil is oil.  Bitumen is diluted tar.  The sea is somewhat capable of dispersing conventional oil through surface wave action so long as the spill isn't too close to any shoreline.  Dilbit, however, doesn't have the physical properties of conventional oil.  Once spilled, the diluent or condensate separates out.  The diluent heads to the surface, the denser bitumen congeals and heads to the bottom, carried to its final resting place by deepwater currents.  Spread over a very large area and at great depths the bitumen is out of reach of oil spill responders and their "world class" equipment.

It took a massive and protracted effort to scrape most of the bitumen from the bottom of the shallow, slow-moving Kalamazoo River in Michigan.  You can think of the Kalamazoo fiasco as a best case scenario.  You can also think of a major bitumen spill on the northern BC coast as the worst of worst case scenarios.

At Kalamazoo, the burst Enbridge pipe dumped about a million gallons, just under 24,000 barrels, of dilbit into the river.  The Exxon Valdez, a large supertanker for its time, lost somewhere between 11 and 32-million gallons of crude oil (not bitumen).  Modern VLCCs and ULCCs carry far more still.

So, we dodged a bullet this time, several in fact.  The Simushir was no supertanker.  It was carrying a modest cargo of bunker oil and diesel, no bitumen.  It wasn't in the treacherous inshore passages of the northern BC coast. By local standards, the winds and sea state were moderate enough to allow a Coast Guard patrol vessel to tow the bulk cargo carrier out to sea and safety, buying enough time for an ocean-going tug to arrive on scene - eventually.

Simushir is a wake-up call but the point to remember, when it's held up as an example of our "world class" rescue services, this time we were holding all the aces.
Posted by The Mound of Sound at 8:52 AM

There were three freighters, that were caught in one of, the horrendous storms off BC's coast. One ship had to put out a distress call. The storm had torn off, this freighters top load of logs. They were very afraid if, the bottom load shifted? The freighter would capsize. It took hours to reach the stricken freighter in that storm.

The other two freighters also, lost their cargo to the sea. They had to turn back and try to make safe harbor, on BC's coast.

Kitimat Port is a Northern Port with frequent, hurricane force wind warnings. There are rogue waves as high as a four story building, that come out of no-where. The channel is narrow with under sea shelves. The Chinese tanker's massive, have to navigate around many small islands.

If that storm had materialized, that Russian freighter would never be rescued. And the behemoth Chinese tankers, most certainly would not be rescued.

Who ever decided to string a pipeline and bring massive dirty oil tankers into those seas, is brain dead.

That's true, Anon. Most Canadians have no clue of the storms that regularly hit that area. 30-metre waves have been recorded. That's a 10-story building.

How many Canadians do you think can even imagine that sort of thing? Tell them the winds on the Hecate have been known to actually bare the seabed and they'll probably think you're mad.

Two Canadian destroyer captains testified at how their very powerful and maneuverable warships were tossed about like toys on those waters. Both said that a heavily-laden supertanker would be doomed.

The 'gale' was mild with seas running 10 to 12 feet or so
They are towing the derelict to Rupert I believe..
via an American tug..

Maybe there's a silver liner in all this, Sal. The tug, Foss, was already sitting in Rupert (which is about as good as it will ever get) and it still took two days to get a line on the Russian freighter. In a bad storm on any of the inshore narrows rescuers won't have days, merely hours, to get on station. Those lulled into complacency by the government's empty assurances may have had their outlook reset.