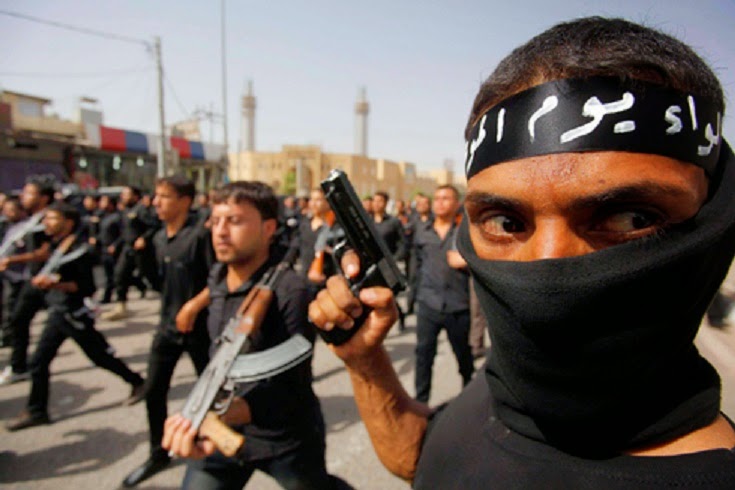 There's no better word to describe the chaos in Iraq and Syria than FUBAR.  If you don't know what it is, Google it.

There are some breathtakingly simple minds beating the drums for Canada to engage in combat against the Islamic State, ISIS.  The trouble is that simple minds, even among self-identified Liberals,  get a lot of good people killed.

The Harper government is chomping at the bit to "get some" ISIS butt and there are enough bellicose Liberals ready to go along.  What Harper and his backers have in common is a phenomenally naive grasp of what is going on and how Western intervention is liable to turn out.

Foreign Policy's Aaron David Miller of the Woodrow Wilson International Center for Scholars, has a dandy assessment of the mess we're likely to get ourselves into.

Looking at our Syria policy, it has begun to dawn on me that we really face a two-part conundrum that we will have difficulty unpacking. First, there's the obvious: Hitting the Islamic State (IS) strengthens Syrian President Bashar al-Assad. Second: If we choose to hit him, we'll buck up IS, al-Nusra Front, and the rest of the swell groups that are in the Syrian opposition, not to mention alienating our new friends, Iraq's prime minister, and of course, Iran, and a few of our old acquaintances like Putin.

That two-part conundrum only reinforces my real concern: the new and potentially slippery slope that is at the heart of our approach. And it's not boots on the ground. Instead, it's the reality that we're being pulled inexorably like a moth to a flame not just toward a military conflict with Assad, but toward bearing the responsibility for fixing -- or worse, for creating -- the new Syria. Indeed, under the realist's rubric of striking IS to keep America safe, we may well end up in the very place U.S. President Barack Obama has willfully tried to avoid: nation-building.
...IS is a symptom of a problem. If it weren't for a failing Syrian state and a weak one in Iraq, we wouldn't be having this conversation. It's the chaos and vacuum combined with the grievance-producing policies of Assad and former Iraqi prime minister Nouri al-Maliki that created the opportunity and the pool of recruits owhich IS and other jihadists feed.
It is only logical to assume that the only stable end state that can, in the president's words, "ultimately destroy ISIL," is good governance in both countries.  And in Syria that means getting rid of Assad and finding new leaders with a more inclusive approach to govern the country.
Second, we can't control our local allies on the ground. It's already evident that beggars can't be choosers. The local Syrian opposition will take our weapons, money, and training on the assumption that the fight is going to be against IS. But who is going to control them? Who will order them to fight against IS once we train them, rather than against Assad, the evil one who has killed their comrades, families, and friends? These forces won't be like predator drones controlled from Toledo. And what about their cooperation with Nusra, which they feel is the most effective force in the field? They already believe the United States has betrayed them and they will use every asset to take advantage of us in order to do what they want to do in the end -- and that means directing fire against the regime. And if they do fight Assad, are we going to stand by not assisting or defending them as we've done with the Kurds and others in Iraq? Already there's more talk of a no-fly zone along the Turkey-Syria border, perhaps as a condition of getting the Turks more committed to the fight. And finally, who stops the ethnic cleansing when Sunnis enter liberated regime areas and start killing Alawites?
...one of the reasons the Saudis and other Gulfies chose to become part of this coalition is about more than just fear of jihadists. They also see an opportunity here to get the United States to engage militarily in Syria not just against IS but against Assad, too. The Arabs understand the contradictions inherent in U.S. policy.
...defeating IS and Islamist jihadists requires Assad's ouster. And while the last thing the United States needs now is another trillion-dollar social science experiment, this time in Syria, the president has now placed America and his successors in the middle of a mess that could evolve in that direction. And something tells me that before it's over, we'll have taken on not only IS, but the Assads, too. The question is what comes after and who's responsible for it? To quote the immortal worlds of Alfred E. Neuman: What, Me Worry?
By the way, if we're really insistent on a bombing campaign to take down the Islamic State, we could begin by leveling Qatar.
Posted by The Mound of Sound at 4:23 PM