Coming Clean, It's Good for the Soul. 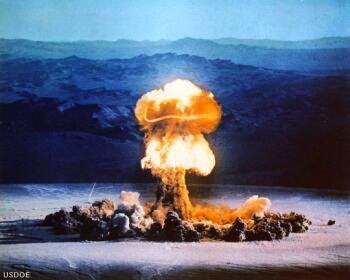 After half a century of persistent fudging the Pentagon has officially admitted the undeniable - Israel has an arsenal of nuclear weapons and all the high tech gear to best use them.

That revelation might not matter much to most of us but, to the US government, it has serious military and foreign policy ramifications.

...the confirmation of this poorly kept secret opens a troublesome can of worms for both the US government and our closest ally in the Middle East. Official acknowledgement poses questions and contradictions that cry out for closer inspection. For many years, the United States collaborated with Israel’s development of critical technology needed for advanced armaments. Yet Washington pushed other nations to sign the Non-Proliferation Treaty, which requires international inspections to discourage the spread of nuclear arms. Israel has never signed the NPT and therefore does not have to submit to inspections.

Washington knew all along what the inspectors would find in Israel. Furthermore, as far back as the 1960s, the US Foreign Assistance Act was amended by concerned senators to prohibit any foreign aid for countries developing their own nukes. Smith asserts that the exception made for Israel was a violation of the US law but it was shrouded by the official secrecy. Since Israel is a major recipient of US aid, American presidents had good reason not to reveal the truth.

The newly released report—“Critical Technological Assessment in Israel and NATO Nations”—describes Israel’s nuclear infrastructure in broad terms, but the dimensions are awesome. Israel’s nuclear research labs, the IDA researchers reported, “are equivalent to our Los Alamos, Lawrence Livermore and Oak Ridge National Laboratories.” Indeed, the investigators observed that Israel’s facilities are “an almost exact parallel of the capability currently existing at our National Laboratories.”

In other words, going back well before the 80s, Israel and the US have been one collaborative lab for developing advanced weapons of mass destruction and yet the US Congress wouldn't hesitate if it only could to attack Iran for basic nuclear processing far short of any weaponized materials.

Update - for anyone interested in Israel and how it came to amass so many nuclear weapons, Foreign Policy has a fascinating whodunnit, "What lies beneath Numec?" that focuses on a uranium processing plant in Apollo, Pennsylvania in the 60s,  and how it came to misplace hundreds of pounds of highly enriched, weapons grade uranium. It's made more intriguing by the fact that Numec's founder, Zalman Shapiro, had close connections to Israel's defence and intelligence establishments.

Email ThisBlogThis!Share to TwitterShare to FacebookShare to Pinterest
Labels: Israel, nuclear weapons, the Middle East, US, war on Iran.

Previous administrations, Bush II one notwithstanding, generally might not have followed the letter of the law, but they did observe the niceties.
Obama's placing the following administration in a difficult position. Actually, let's be honest. Israel's placed the next president in a difficult position. Obama's just given Israel a nice 'how d'ya do?'
A nice easy decision. Follow the law, and allow Israel to wallow on its own, or break the law, and condone anything and everything Israel does to its captives, the Palestinians?

Add this admission to Netanyahu's promise that he would never allow the Palestinians to have their own state, and to the over four thousand civilians that Israel killed in the most recent Gaza conflict, and the U.S. is going to have a very difficult time defending Israel going forward.

Eric Margolis, however, seems to think that Israel even has so much control over U.S. politicians, including Hillary, if she should become President, that it can now do anything it wants: http://ericmargolis.com/2015/03/mideast-peace-is-buried/

Hopefully, Margolis is wrong, for the sake of world peace.

Troy, I think we are on the verge of accepting Israeli enslavement of the Palestinians. They are a captive people. Their babies today are born into captivity as were their parents. In this we're complicit.

@ Anon. Thanks for the link. Like you I hope Margolis has it wrong but that's a hope in which it's difficult to hold any confidence.