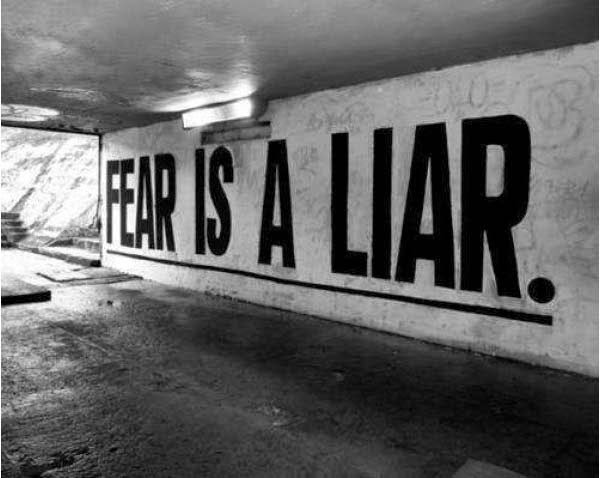 The fuel of the authoritarian state is always the same.  It's fear.  Distorted, wildly inflated, even irrational, fear is the cheap and dirty solution to grasping, expanding and perpetuating power.

The Israeli election was a master class in the exploitation of a people through the application of fear.  On election day Netanyahu used fearful images of shady foreigners busing Arabs "in droves" to the ballot boxes to subvert Israel's democracy and bring down the state.

This is not to say there aren't people and things we should rightly fear.  There are and there are plenty of such people and things.  Yet the focus we should bring to these genuine threats can be easily masked and diverted by contrived and inflated and irrationally powerful but largely made up fears.

We have a term for those who manipulate others with fear.   They're called "fearmongers."  Although it's fallen into desuetude (look it up), monger used to describe a merchant or trader of sorts - fishmonger, cheesemonger, ironmonger. Today, however, it's mainly used to describe the low life types who spread or stir up things discreditable - warmongers, whoremongers, and, of course, fearmongers.  The thing to keep in mind is that they're all cut from the same cloth.  Benjamin Netanyahu and our own Stephen Harper are cut from the very same bolt of cloth, made to measure.

Let's say you're presented with two glass goblets.  One, you know, is full of a really vile-tasting wine.  The other, you're made to believe, contains battery acid. You have to drink one.  Which will it be?  Of course you'll swill down the terrible wine.  You might be angry about it when you discover the alternative wasn't acid at all but just a glass of ordinary water but by then it's too late.  You drank the wine.  Mission accomplished.

I tell you "this is bad."  You believe it's bad. You do precisely what I want you to do even though you don't like it.

"Whenever one group uses fear to manipulate another, someone benefits and someone pays,” wrote sociologist Barry Glassner, in the 10th anniversary edition of The Culture of Fear: Why Americans Are Afraid of the Wrong Things.  As he noted, “Threats to the U.S. financial system, obscured from public view in part by endless attention to the ‘war on terror,’ undermined America’s national security more than Osama bin Laden and his organization ever did.”

...George Lakoff, a nationally known linguist and author has analyzed how language and the media shape conservative and liberal dogma. “Basically, what you’ve got are monopolies running your life in any dimension and it’s not mentioned. It’s not discussed. It’s not a topic of conversation. It’s not a topic of legislation. It isn’t something that’s out there.”

Instead, American media is filled with pro-corporate and anti-government propaganda.

“Corporations run your life all the time,” Lakoff continued. “Look at the corporate ads on TV. Corporation ads are innocent. They have nice little sounds. Think of the music in oil company ads and the people in them. It’s like, ‘We’re pleasant. We’re progressive. We’re making progress. We’re cute,’ etc., when they’re actually running your life.”
...“You have all of these progressives out there who went to [liberal arts] school and did well thinking that all you have to do is tell people something once, give them the facts, they’re all reasons to the right conclusion,” he said. They think “that’s all you can do, or should do, when that’s utterly false… That’s not how the brain works.”
Lakoff said repetitive, fear-based moralizing sticks—and the GOP knows it, in the same way that corporate marketing experts do. “In politics everything is based on morality,” he said. “Mainly, you want your policies to be right, not wrong. What counts as right varies between progressives and conservatives. The conservatives, when they go to school, take business courses and marketing courses. Marketing professors study neuroscience and cognitive science… They’ve been doing it very well for 40 years.”

Repetition of fear-based messaging—without a steady counterpoint or context to stop that drumbeat—has been shown to affect the brain patterns that determine how people think, Lakoff said. It is akin to repetitive exercise that creates muscle memory. Depending on whether one is more inclined toward a liberal or conservative ideology, one can hear the same words but reach different conclusions.

...Lakoff said pollsters have spread a false myth that there is a political center. What really exists are varying degrees of conservatism and liberalism—two bell curves, not one. The absence of strong, clear, morally based messages from Democrats has allowed the GOP to demonize government, which pleases their corporate sponsors. Meanwhile, corporate publicists keep touting their good deeds, he said, and “you don’t hear anything else.”

“You don’t hear anything at all,” Lakoff said. “Let me give you a simple example. What are pensions? Pensions are late payments for work already done. They’re part of wages. When a company says, ‘Well, I can’t afford to pay your pension anymore,’ or when they cut public servant pensions, they’re stealing your money. They’re stealing your wages. Who says it? …The Democrats say, ‘Oh, well, we can’t say stuff like that.’”

Fear is a cudgel.  It's a weapon.  It's a hallmark of illiberal democracy that fear is used against the monger's own supporters, his loyal constituents.  Harper does it all the time, it's his standard operating procedure.  He uses fear as a yoke to harness his supporters to pull his wagon.  He uses fear as blinders to keep their eyes from straying to things he doesn't want them to see or start thinking about. He uses fear to keep them from hearing the lies in his words.  He uses fear to rob his own people of their power and their reason.

As Glassner observes, when Harper uses fear to manipulate the Canadian people, "someone benefits and someone pays."