The Still Beating Heart of Progressivism 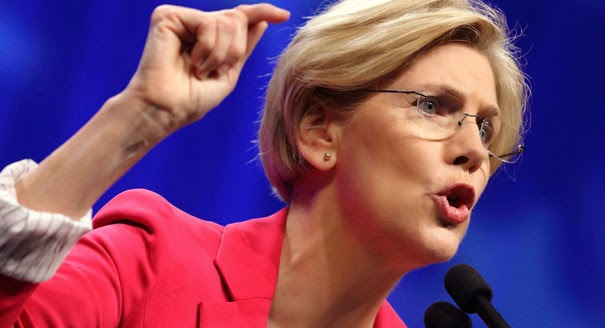 Not dead yet.  The venerable Boston Globe has published an editorial urging a certain American to run for the presidency of the United States of America.  The newspaper wants senator Elizabeth Warren to enter the race.

...the Democratic Party finds itself with some serious divides that ought to be settled by the electorate. Some are clear-cut policy differences, such as the Trans-Pacific Partnership, an enormous free-trade agreement with Pacific Rim nations that Warren opposes and Clinton backs. Even in areas where the candidates agree, there are bound to be different priorities: It’s hard to imagine a President Clinton defending and enforcing the Dodd-Frank legislation with as much vigor as a President Warren, for instance.

Indeed, the big-picture debate on financial regulation and income inequality is what’s most at peril if the Democratic primaries come and go without top-notch opponents for Clinton. While she has a great many strengths, Clinton seems far more likely to hew to a cautious approach on economics. Her financial backing from Wall Street, her vote in the Senate to reduce bankruptcy protections, and her past reluctance to raise capital-gains taxes are no secret. Nothing about her record suggests much gumption for financial reform or tackling the deeply entrenched economic problems that increasingly threaten the American dream.

Unlike Clinton, or any of the prospective Republican candidates, Warren has made closing the economic gaps in America her main political priority, in a career that has included standing up for homeowners facingillegal foreclosures and calling for more bankruptcy protections. If she runs, it’ll ensure that those issues take their rightful place at the center of the national political debate.

The Globe is right on the money.  Hillary is the closest thing the Republicans have this time around to a presidential candidate.  She's a Democrat but not by that bloody much.  Clinton is a foreign policy hawk with decidedly Wall Street instincts.

I wish Elizabeth Warren would run too. I don't look forward to a US lead by Hilary very much more than I look forward to one lead by Jeb Bush or (god forbid!) Ted Cruz.
On the other hand, I would not wish the leadership of any country on my worst enemy these days. What a quagmire!

What's the alternative, Karen, but chaos? We need leadership today probably more than ever in the post-war era to meet a gaggle of challenges that are already threatening and poised to get much worse.

What we don't need is the sort of leadership we've got. Harper, Trudeau, even Mulcair are all stuck somewhere in the 80s. Not one of them offers a policy platform that reflects today's reality - climate change, inequality, the democratic deficit, the failure of our mass media, global entanglements - on and on.

It's going to take a progressive renaissance to rehabilitate our society. Those whose main preoccupation is scavenging votes will never find the vision so badly needed right now.

Cruz, I think, would win against her.

And that might not be a bad thing, in the long run.

If only she would and not be swade from her beliefs once in power. Anyong