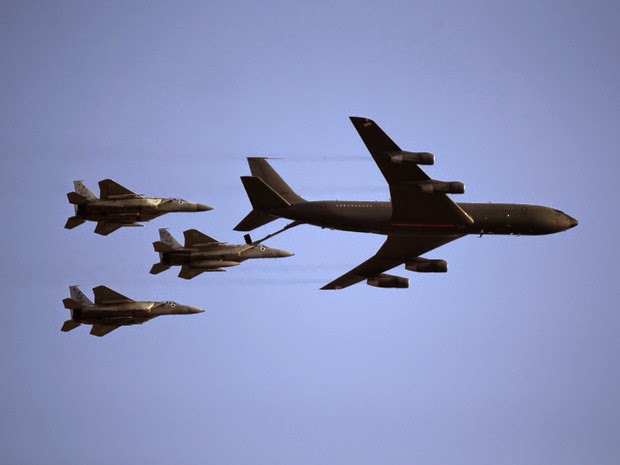 It's reported that the Saudis have given Israel a green light to overfly Saudi Arabia should Netanyahu decide to launch an attack on Iran.

Jerusalem and Riyadh do not have diplomatic ties, but unconfirmed reports have swirled for years of coordination between them against the common enemy of Iran, a partnership that may ramp up should the world powers reach a reportedly emerging deal that would allow Tehran to continue enriching some uranium.

There's some suggestion that NATO tacitly approves of an Israeli air war on Iran.

Saudi Arabia and Israel may be given the green light to attack Iran on behalf of NATO powers if NATO feels it could not sell a direct war in Iran to their populations back home. Regime change in Syria is a prerequisite before an overt attack on Iran can take place however, as Damascus is an important Iranian ally in the Middle East. If a military assault on Iran occurs it would be difficult for the arena of conflict to be contained to the Middle East, as it has the potential to rapidly escalate into a wider conflict involving Russia and China.

Western nations have been engaged in attempting to covertly overthrow the present Iranian regime for decades, a country that has been placed under sanctions by an assortment of nations for years. Regime change in Iran has been a dream of Western foreign policy strategists for decades, with Iran pinpointed in a strategic paper written in 2000 by the neoconservative thinktank, the Project for a New American Century (PNAC), alongside countries such as Iraq, Libya and Syria. Retired US four star general and former NATO commander, Wesley Clark, also revealed a plan circulating around the Pentagon in 2001 to attack 7 countries in 5 years, with Iran named as one of the seven.

I wonder if Israel will be able to wait until it gets those F-35s.

It's bizarre that these supremely powerful US elites feel so threatened by the slightest bit of disagreement.

Unfortunately, there's more of that in store for them.

The market rules.
Just as the Dollar jumps up & down so do the stock markets.
Fear mongering is a potentially deadly extension of this theme.
We have little to no positive interest rates to prop up the economy or our savings.
Fear is the only thing selling.

I don't think Israel is going to attack Iran all by themselves. Especially not if Iran actually has the latest Russian anti-air missiles.
I don't think even Netanyahu wants to attack Iran. He wants to be able to keep salvaging his political career by pointing out the scary danger of Iran, not deep-six it by becoming the guy who crashed the world economy actually fighting Iran.