It's the Colorado way - weed.  Since legalizing the production, sale and recreational use of marijuana the state has been raking in a tidy sum in new excise taxes. 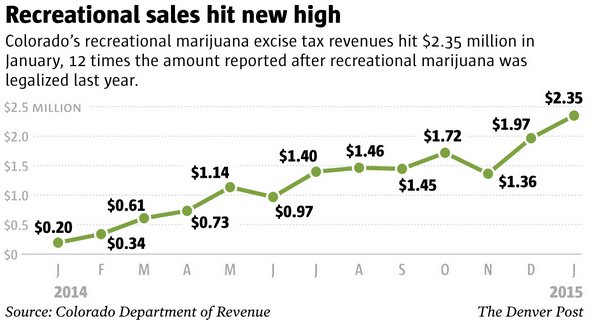 Colorado's marijuana users are helping to buy new roofs, boilers and security upgrades for public schools across the state as the first round of special pot taxes gets allocated later this year.

The state's voters in 2012 legalized pot sales – and taxed them heavily – in part because the constitutional amendment promised that $40 million dollars a year would go toward school construction across the state. In the first full year of sales, however, the state expects to collect only about $17 million in special school taxes levied on the marijuana industry. Still, it's better than what the state collected the year before: nothing.

"The people who were smoking marijuana before legalization still are. Now, they're paying taxes," Gov. John Hickenlooper said.

The state expects that tax revenue to go nowhere but up as new permits are issued.  Just think, that money used to go straight into the pocket of organized crime.  One other thing to remember when considering these numbers - Colorado is a state of just barely 5-million people.
Posted by The Mound of Sound at 12:50 PM