It's Not For the Sake of Science. 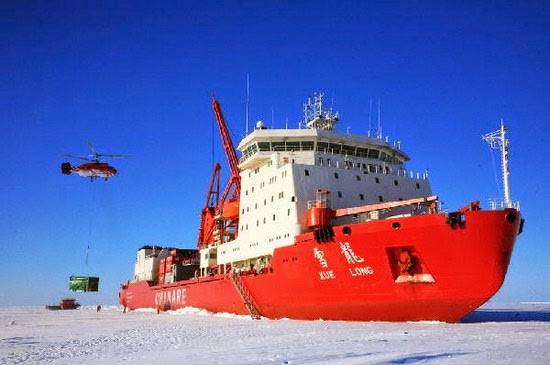 John Higginbotham, senior fellow at the Norman Paterson School of International Affairs and the Centre for International Governance Innovation and Arctic policy expert, knows that China is eyeing the Arctic's resource wealth, but says that Canada should welcome researchers, as long as they can ensure that Chinese research adds and builds on work already done by Canada.

"I am not at all concerned that we, Canada, cannot well protect our sovereign interest... while at the same time finding important areas of co-operation and common interest with China," says Higginbotham.

Before we go along with this sort of thing it might be prudent if we got some thorny issues clarified first.

One problem arises out of China's position that seabed resources in the Arctic Ocean should not be governed by the standard international conventions.  China is not an Arctic nation and so it fears that the existing protocols could impair its access to these resources.

A second problem is that China has already stated it wants to maintain a permanent military presence in Arctic waters.  Why?  Does it think the Northwest Passage is in peril from Inuit copying Somali pirates?  Does it worry that Russia, the United States, Canada and Norway can't maintain naval security in their shared waters?

Of course we have a huge problem.  Beijing is currently our prime minister's Head Office and the Nexen deal showed how low Harper will go to keep his masters happy.
Posted by The Mound of Sound at 10:34 AM

It probably is for training and research.

Geostrategic aims are hard to see. Perhaps there is a small chance that in the (not so near) future, they may need this cold-climate expertise should the Antarctic treaty collapse, and feel forced to claim a share of that continent, or help a future ally (like Argentina or Russia) enforce their claims.

I wish you were right, Chris, but I have tried to follow the Asian coverage of China and the Arctic for the past few years. China already has the largest, non-nuclear ice breaker and its military have declared their intention to establish a permanent presence in the Arctic Ocean. The government has likewise questioned whether Law of the Seas protocols should apply to the Arctic.

What I haven't seen is any suggestion that any of these things bear on the Antarctic.

I'm thinking it's more like a bargaining chip. If they get a big enough presence, then ultimately they might be able to swap them pulling their noses out for the US to quit harassing them in the China Sea.