The Warming Continues to Race Ahead Where It Matters Worst. 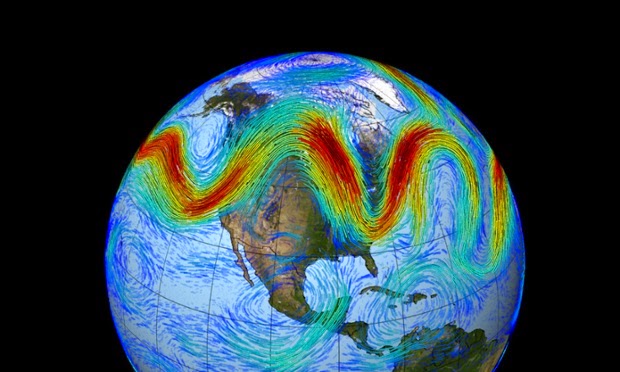 Where does global warming matter more than anywhere else?  It matters most where it's already worst - in the Arctic.

Many of you have endured another cold, snowy winter.  Out here we've had the opposite - warm and dry conditions.  Call it climate change and blame the warming Arctic.  Bad as the winter phenomenon has become, it's the summers that could be the real threat.

We know that the Arctic is heating faster than the planet as a whole. Consequently, there is more energy in the Arctic which can be transmitted to the atmosphere. Much of the excess heat is transferred to the atmosphere in the late fall or early winter. This extra energy is connected to what’s called Arctic geopotential height, which has increased during the same times of the year. As a consequence, the Jetstream might weaken in the cold seasons.

But what about summer? Have these changes been detected then too? Well just recently, a paper was published in that answered this question. The authors, from the Potsdam Institute for Climate Impact Research and from the University of Potsdam reported on three measures of atmospheric dynamics (1) zonal winds, (2) eddy kinetic energy, and (3) amplitude of the fast-moving Rossby waves. Rossby waves are very large waves in the upper atmospheric winds. They are important because of their large influence on weather.

The authors found that the summer zonal winds have weakened. The reason for the weakening is that since the Arctic is warming faster than the rest of the planet, the temperature difference between the Arctic and the lower latitudes is getting smaller. It is this temperature difference which maintains the wind speeds. The authors also found that eddy kinetic energy is decreasing.

So what does all this mean? Well two things. First, it means that there are either fewer or less intense summer storms or a combination of both. But secondly, it means that weather patterns can get “stuck”. Storms are excellent at breaking up persistent weather patterns, and bringing cool and moist air from ocean regions to land zones. With fewer storms, “warm weather conditions endure, resulting in buildup of heat and drought.”


The authors looked to the future to inquire about how things would continue to change. They find that continued global warming will increase the risk of heat waves. We all know that the warming temperature will make heat waves more likely. But added to this, “stickiness” of weather patterns will play a big role as well.

This "stickiness" causes weather systems to stall over one area for an extended time.  It can result in heat waves that scorch crops in the fields.  As we saw in Calgary, it can stall heavy rainstorms over a place for days, storms that before this Arctic warming would move steadily from west to east.

There's no fix for this, no cure.  The Arctic is going to continue to warm.  That changes the surface - the tundra and permafrost, the sea ice and the Arctic Ocean waters.  The tundra thaws, dries out and - peat will be peat - catches fire releasing black soot into the air that winds up coating places like the Greenland ice shield.  As the tundra goes it exposes the permafrost beneath which also melts, releasing into the atmosphere the methane it's been securely holding for hundreds of thousands of years.  The warming has caused the loss of Arctic sea ice.  The winter sea ice cover is apparently heading for a record low this year. That sea ice has kept the Arctic cold by reflecting solar radiation back into space. Remove a patch of reflective sea ice and you expose a patch of heat absorbent water.

So, sure, you've had a helluva winter but up there they've had what is for them unusually warm conditions.  Who can forget a couple of years ago when Atlanta, Georgia was paralyzed for days by snow and ice in February while a village in Alaska basked in mid-60s temperatures?  Alaska, February, 60s.  That's not the way it's supposed to work but it does now.

Here's the kicker that no one wants to talk about.  What's in store for the Arctic over the balance of this century?

US scientists say that by the end of this century temperatures in the Arctic may for part of each year reach 13°C above pre-industrial levels.

James Overland, of the US National Oceanic and Atmospheric Administration, and colleagues, writing in the American Geophysical Union’s journal Earth’s Future, say average temperature projections show an Arctic-wide end of century increase of 13°C in the late autumn and 5°C in late spring for a business-as-usual emission scenario.
From Russia to Europe to North America we're already getting whipsawed by the changes underway in the Arctic.  What we need to understand what we're getting now are the "early onset" impacts.  There are probably much bigger changes coming to us from the far north.