Okay, Canada. Prepare To Be Probed. 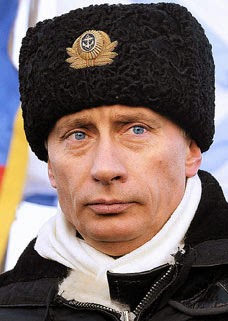 What a moment to be stuck with a navy so horribly neglected that it can't put a single task force to sea.

Now that the Harper government has left us with our pants down in the Arctic, Vlad Putin has placed Russia's Northern Fleet and paratrooper units on full alert for military exercises in the polar region.

Defence Minister Sergei Shoigu, who is overseeing an expensive modernisation of the armed forces, said Russia faced new threats to its security which obliged it to boost its military strength and capabilities.

"New challenges and threats to military security require the armed forces to further boost their military capabilities. Special attention must be paid to strategic formations in the North," RIA quoted Shoigu as saying.

Russian Deputy Foreign Minister Aleksey Meshkov said on Monday, according to Tass news service, that Russia was "deeply concerned about the increase in exercises of NATO countries close to our borders".

It was "particularly surprising that this takes place in the north-eastern region of Europe, which is the most stable in security terms, not only on our continent but possibly in the world," Mr Meshkov said.

Tensions between Russia and the West have reached their worst level since the Cold War over the crisis in Ukraine.

Maybe Putin will give Canada a pass because, after all, what's the point of going up there if we wouldn't notice?

The exercise reportedly will involve 41-surface warships, some 15-submarines, 40,000 personnel and a variety of air force units.  Maybe they'll send Jason Kenney a souvenir postcard.
Posted by The Mound of Sound at 10:25 AM

.. where on earth did mainstream Canadian media disappear to Friday approx 5 PM ? And why have they not reappeared.. ?

If there is one thing Canadians deserve.. ok, require.. from our media, its reporting the news, the facts, the events, the players or perps etc.

Russian leader disappears... and on reappearing orders one helluv a military 'exercise' inc nuclear subs that float, navigate & can no doubt launch on command.

A CSIS 'spy' launched, funded or fumbled by our vaunted secret squirrel government & embassy in Jordan/Iraq .. seems to be enabling jihadi brides to enter Syria

Well, maybe the 'press' is resting up for the Duffy & Nigel goat rodeo.. which as you point out won't be conducted under the queer fawpish 'rules' of Question Evasion Period.. but with lawyers, the Crown & judge..

Do I see daily election popularity polls in Stephen Harper's dim future? That stinking cadre of misfits cheaters has everything to lose.. and essentially nothing to gain. We need a steady dose of such cases to wake up the slumbering press, the nation.. and show the rest of the world our hearts still glow

Hey, Sal. Harper's hypocrisy knows no bounds. He proclaims himself to be the best friend our military has ever had and then he chokes our defence budget and readiness into oblivion. 1% GDP. That's half what it was under Pierre Trudeau. Harper's NATO counterparts press him to double our defence spending and he gives them the finger.

Our navy's provisioning ships and air defence destroyers, without both of which we cannot put a task force to sea, are heading for the scrap yard.

We have neither aircraft nor ships of the sort and numbers needed to defend our vast northern frontier. Meanwhile we've got F-18s carving holes in the sky over Estonia. Why are we defending the Baltics against Russia when we can't defend Canada against Russia?

Meh. I'm starting to think having hardly any armed forces might be good in the next while. The latest "anti-Russia" dance seems to be one we won't have the guts to sit out because it's an insane idea. If we get lucky enough to sit it out because we have no legs to dance with that's at least something.

My preference, PLG, is for Canada to adopt the sort of self-defence posture of the Scandinavian type. No more buggering about in the Middle East, eastern Europe or the Baltics. We've been in that up to our eyeballs and what lasting good has come of it?

We've been in service to NATO since the 50s. Maybe it's time NATO deployed naval and air units to secure Canada.

Isn´t this just a tad reminiscent of what took place before WWII. Nothing to face them with? On the other hand...you are correct Mound with your last comment. There are a lot of people who think the same thing. Anyong