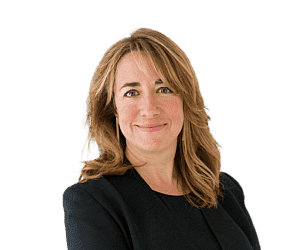 When Alan Rusbridger retires this summer as editor in chief of The Guardian, Katherine Viner will fill his shoes and, as the first female editor of that venerable paper, she looks pretty impressive.

Viner does stand out from the London media crowd in being from Yorkshire, in the north of England, and for being a playwright and activist as well as a journalist. My Name Is Rachel Corrie, the play she and actor Alan Rickman wrote based the diaries of the 23-year old American killed by an Israeli army bulldozer as she tried to prevent the demolition of Palestinian houses in the Gaza strip, has been produced in London and in US cities from Seattle to New York. But of the four internal candidates for the job who entered a staff ballot three were women: Viner, Emily Bell, who helped set up The Guardian’s website and now directs the Tow Center for Digital Journalism at Columbia, and Janine Gibson, Viner’s predecessor as editor-in-chief of Guardian US who is now editor-in-chief of theguardian.com. Viner’s overwhelming victory in the staff ballot—she got 53 percent of the vote—made her the favorite, and also spoke volumes about her ability to retain the loyalty of colleagues and contributors despite having spent several years thousands of miles away setting up The Guardian’s Australian website.

The presence of so many highly qualified women on the list is just one indication of the huge changes wrought by Rusbridger, who was himself only 42 when he took over in 1995 (Viner is 44). Whereas his predecessor, Peter Preston, handed over the leaked government documents that sent whistleblower Sarah Tisdall to prison, Rusbridger from the first showed a willingness to fight, successfully defending the paper against libel actions brought by the Police Federation and the MP Jonathan Aitken—who ended up in prison himself after The Guardian obtained proof he had perjured himself on the witness stand. In 2013 Rusbridger decided to physically destroy the hard drives containing information leaked by Edward Snowden rather than obey an order to hand the data over to the government. The launch ofGuardian Australia challenged Rupert Murdoch on his home turf. And of course it was Rusbridger and Ian Katz, then The Guardian’s deputy editor, who were the paper’s contacts with Julian Assange. (Katz, now the editor in chief of the BBC’s flagship Newsnight program, was the “outside” candidate who lost to Viner in the final round last week.)
Posted by The Mound of Sound at 12:51 PM