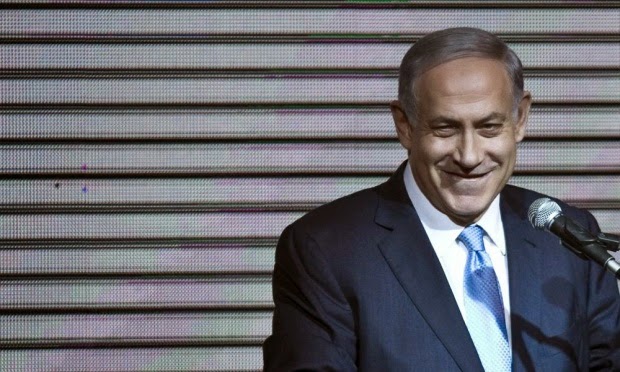 Tossing ideas around yesterday I came to a "What If" moment.  What if, I wondered, Israeli prime minister re-elect, Benjamin Netanyahu, has destroyed Israel's lifeline - the backing of the president of the United States of America.

It's been the American president, who alone controls his country's veto at the United Nations Security Council, who has intervened dozens of times over the years to prevent the U.N. from responding to Israel's excesses, particularly its half-century of mauling of the captive Palestinian people.

What if?  Could it possibly happen.  Then, this morning, Boris from The Galloping Beaver left a comment to the effect that Gwynne Dyer sees that security council business pretty much the same way.


...Netanyahu’s entire political career has been dedicated to sabotaging the 1993 Oslo Accords (which envisaged Israeli and Palestinian states living side-by-side in peace) and planting so many Jewish settlers on the Israeli-occupied territories that a separate Palestinian state becomes physically impossible.

He largely destroyed the Oslo agreement in his first term as prime minister in 1996-99 (the creation of a Palestinian state was scheduled for 1998). Almost 10 percent of Israel’s Jews now live in the occupied Palestinian territories (east Jerusalem and the West Bank) that would make up a Palestinian state. But to keep his American allies and his European supporters happy, he never actually said he would not allow an independent Palestine.

Netanyahu finally spoke the truth on Monday because that’s what the settlers and their supporters wanted to hear, and he needed those votes in order to survive politically. But it destroyed the myth, useful to the United States and the European Union, that there is some surviving “peace process” that must be protected by keeping the Israelis happy. The “peace process” is dead, dead, dead. Has been for years. There is no “two-state solution” on the table.

This makes it a lot harder for the U.S. to veto resolutions critical of Israel at the United Nations, as it has done 51 times since 1972. Without the cover of peace talks, these vetoes become votes for perpetual Israeli rule over the Palestinian people. And it will accelerate the broader erosion of the old pro-Israel reflexes of people in Europe and the US who needed the reassurance that some day, somehow, there would be a just peace settlement.

Netanyahu made matters considerably worse during the campaign by openly showing his contempt for President Barack Obama. His panic-mongering speech to the U.S. Congress, painting Obama’s quest for a nuclear deal with Iran as a naive surrender to Iran’s alleged desire for nuclear weapons, was an unprecedented foreign intervention in the U.S. political process. It will not be forgiven or forgotten by Obama.

His election promise to speed up Jewish settlement in the Palestinian territories (which is illegal under international law) was another nail in the coffin of peace negotiations. Still, it did help to get Netanyahu re-elected, and for him that’s all that counts.

He still truly believes that only he understands the real and existential dangers facing Israel, and has the will to do something about them. Except that all he ever really does is kick those dangers down the road a bit. Unable to believe that a peaceful settlement is possible or even desirable, he condemns his country to perpetual conflict and growing isolation.

Benjamin Netanyahu has given the finger to his best ally, his indispensable ally, and not just once.  He did it so that Bibi could remain the prime minister of Israel.  Before Tuesday it was unimaginable that a president of the United States would not call a prime minister of Israel to congratulate him/her on an election victory.  The unimaginable has happened.  Obama has nearly two years left in office and he doesn't have to seek re-election.  John Boehner and Mitch McConnell don't get a vote at the U.N.  From here on,  we're sailing in uncharted waters and there are storm clouds gathering.

The only problem with the hopeful Security Council scenario is, Barack Obama is a massive wuss. He will not upset the status quo in such a fashion. About the most he'll do is nibble around the edges of US support for Israel by, say, not leaning hard on the Europeans when they start backing away from Israel.

I do think this is something of a watershed moment, but it will all play out slowly and relatively passively. There will never be a moment when the US says "We've decided we're not going to uncritically back Israel any more (with the implication that we may have somehow made a mistake backing them uncritically as long as we did)". No, rather a ways down the line there will eventually be a moment where criticism of Israel has become the new normal and the US will say, "Of course, we never backed Israel uncritically and also please remember we were always at war with Oceania".

Well, PLG, as every third rate journalist would say, "time will tell."

Among Palestinian news they seem to agree and are happy with Netanyahu's re-election because it does undermine U.S. support.

Even Haartz is pointing out the U.S. has known all along the peace process was a sham that Israel never had any intention of respecting and Netanyahu exposes their deception bare.

I shall be keeper of the friendly bet between Mound and Purple lib guy. The stakes are high, perhaps as high as during presidency of JFK.
A..non