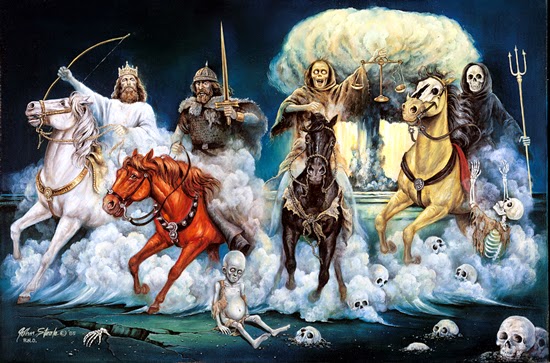 Most of us just don't want to know.  Most of the rest are coming to feel the same way a lot of the time.

Interesting op-ed by Quincy Saul, "The Four Horsemen of the Apocalypse."  It deserves a read.

Ecology: The global climate is officially destabilized. Major tipping points have passed, and while the struggle to remain within others must continue, we have already lost the battle to preserve life on earth as we know it. Rising seas will reshape continents and spreading deserts will drive mass migrations. Climate change will redraw the world map and will literally shake the earth.

...We are in the middle of a mass extinction, which all accounts and reports indicate will continue to accelerate. If current rates of extinction continue, by the middle of this century, between one- and two-thirds of all living species on the planet may disappear. While superstorms and melting ice caps may be more dramatic, this accelerating loss of biological diversity in the long run is even more catastrophic. In the early 1980s, biologist E.O. Wilson compared this threat to others facing the world at that time;

"Energy depletion, economic collapse, limited nuclear war or conquest by a totalitarian government. . . . As terrible as those catastrophes would be for us, they could be repaired within a few generations. The one process ongoing in the 1980s that will take millions of years to correct is the loss of genetic and species diversity by the destruction of natural habitats. This is the folly that our descendants are least likely to forgive us."

If we live in times of prophecy, then ecological catastrophe is the black horseman of the apocalypse, carrying the scales of a radically unbalanced earth system, leaving famine in its wake.

Economy: The world economic system is in a structural crisis from which it will not recover. The morbid symptoms of its demise are increasingly evident. It is now mainstream knowledge that the major banks of the world routinely launder moneyfor the drug and arms trade.

Furthermore, the so-called middle class is at an end, even if the working class has not yet stepped up to replace it. Inequality is at an all-time high, with rates of poverty and affluence, malnutrition and obesity, reaching ever more epidemic proportions.

One-third of all food is wasted. Women own only 1 percent of the world's property. The absurdities of our economic system are increasingly well known and recognized. An article by Matt Taibbi in the Rolling Stone had a comprehensive title: "Everything is Rigged:"


"Conspiracy theorists of the world, believers in the hidden hands of the Rothschilds and the Masons and the Illuminati, we skeptics owe you an apology. You were right. The players may be a little different, but your basic premise is correct: The world is a rigged game. . . . Forget the Illuminati - this is the real thing, and it's no secret. . . . The idea that prices in a $379 trillion market could be dependent on a desk of about 20 guys in New Jersey should tell you a lot about the absurdity of our financial infrastructure."

The economy is the white horseman of the apocalypse, representing both evil and righteousness, wearing a crown and armed for conquest.

War: Former US Vice President Dick Cheney promised the world "a war that will not end in our lifetimes," and we are now beginning to see the form it will take. Resource wars in the Middle East and North Africa are now joined by wars born of political turmoil. Global military expenditure is currently soaring at $1.6 trillion per year, an increase of 53 percent over 14 years ago.

Today in Egypt and Syria, we witness the seeds of a bloody and tangled future, where mass social movements for national liberation and self-determination are converted into proxy wars between the global potentates. Collapsing ecosystems and economies together fan the flames of war higher. In these geopolitical nightmares, carried to a fevered pitch by the society of the spectacle, nothing is true and everything is permitted.

War rides the red horse of the apocalypse.

Surveillance States: 1984 has arrived, only 30 years after Orwell predicted. The revelations brought to us by Chelsea Manning, Julian Assange and Edward Snowden show us a world in which everything is under surveillance. Julian Assange has written with great eloquence about the death of civil society overseen by the surveillance state. (1) Today in the United States alone there are more than 5 million people working under security clearances - more than the population of Norway. The mirror image of this army of spies is the enormous number of people in prison, including more African Americans under state control than there were slaves prior to the Civil War.

This is the last stage of the state, the totalitarianism that is the last gasp of every totality. The surveillance state has the capacity for not only genocide, but also extinction: It is capable of repressing and destroying the revolutionary movements that still have hope to fight for life.

The surveillance state rides the pale horse of the apocalypse, representing death.
It's at this point that Saul offers us a glimmer of hope.

...in the ancient Greek, apocalypse and revelation are the same word. What is the tipping point between the end of the world and the beginning of the world?

You are. We are. It's time to realize it. Time to seize the day and never let go.

I checked out your link, Hugh. What's going on is incompatible with any notion of liberal democracy. We're already well into uncharted waters.

We do not need no stinking experts! God would never let us destroy our own biosphere.

Well Steve....it seems he is doing just that. Allowing destruction!!