Sure He's a Lout With a Big Mouth But, Dammit All, It's a Car Show 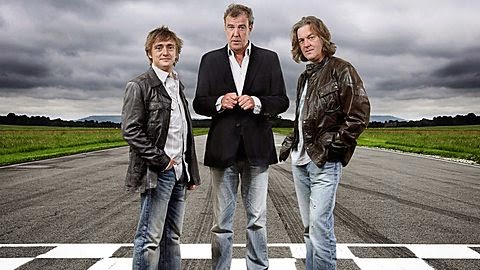 Confession.  I am one of more than 750,000 fans who have signed an online petition demanding that the BBC reinstate Top Gear host Jeremy Clarkson.

Sure, he's a lout.  I got that.  He's irreverant.  Check.  He's anything but politically correct.  True enough.  He's a fossil fueler, a real gear head and a climate change denier spurner.  Yeah.

The carbon footprint of Jeremy Clarkson and his fellow presenters, James May and Richard Hammond, is straight through the roof.  They drive an endless array of massively powerful gas guzzlers at insane speeds - and, like the rest of the planet or at least the 300-million of us across 100-countries with TV access, I love to watch.

I will never drive the cars they drive but it makes me happy that they do.  I don't want to drive those supercars but I do like to watch.

So he punched a producer.  Dock his pay if you like, BBC.  Just don't fire the guy.  He's been doing Top Gear since 1988 and, by all accounts, this is the first time he's punched out a producer.  Hell who hasn't had a co-worker every now and then who needed one upside the head?  The Germans even have a word for it, backpfeifengesicht ("a face badly in need of a fist").

Chances are he will likely quit.

Despite the fracas the BBC does not need Top Gear - just like the CBC should focus on quality.

Let's not forget that Mr. Clarkson received many final warnings. Are you saying that fair warnings should be ignored?

The show can likely survive without its "stars".

Anon, I can still distinguish between a serial, sexual predator and a boorish host of a car show. It's unfortunate that is lost to you.

Also it's a bit inane to contend that BBC doesn't need its biggest revenue earner, bar none, especially during a sustained period of government cutbacks. As for quality, there are literally dozens of car shows on TV around the world. Only one gets carried in over 100-countries. I think that speaks to the quality of Top Gear.

Well, you can look at it another way.

If you drunkenly called your boss "a lazy Irish cunt" and then punched him in the face because you had to suffer eating a cold platter would you expect to keep your job?

So basically Mound is your position is that it's okay to be abusive at work?

Well, given that I have Irish in my family, I've probably said something similar at least a few times. As for the punch, I'll go no further than to admit that I've come close myself over many years in the workplace. Consider it the siren call of "backpfeifengesicht."

If he's actually committed an assault, his victim should lodge a complaint with the police authorities and put the matter where it belongs, in the criminal justice system. If he hasn't done that, I'm not going to second guess what happened nor am I going to get as vexed as you over it.