My friends and relatives back east have been finding the reality of global warming  more difficult to accept recently as they endured a pretty amazing and protracted bout of cold weather.  Why not just consider yourselves unique, perhaps even exceptional?  Because, as this graphic of average February temperatures reveals, that's exactly how the rest of the world sees you. 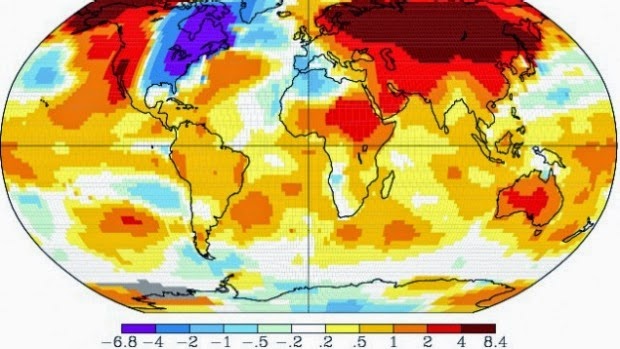 You're that delightful yet quite little patch of indigo in a world that's predominantly brown, red and amber.  That's why it's called global warming and not eastern North America warming.

Maybe if the capitals of Canada and the US were in the west instead of the east, we'd have a bit more political will to deal with what's already a crisis.

Oh yeah, it's now official.  If you're under 30, the average temperature of every month of your life has been above the 20th century average.  Given that science suggests we're in for a bout of accelerated warming, that'll probably hold true for the rest of your days too.

By the way, while you easterners have had to endure a severe winter, in Alaska they've had to relocate the Iditarod Trail sled dog race because of warm conditions.  The course has been moved 250-miles north to ensure adequate snow cover.
Posted by The Mound of Sound at 9:40 AM

We had snow here in Mexico today. Anyong.

Well you had better break out the skis, Anyong. Snow, Mexico, March. Whereabouts?

"How could the ship be sinking? our end just shot 50 feet in the air!"

In the northern part of Mexico in the higher elevations. On the new here. Anyong