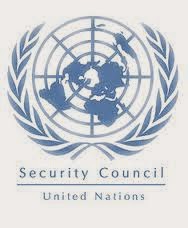 What if a motion to recognize Palestinian statehood comes before the United Nations Security Council and the United States elects not to use its veto?

The veto power only resides in the five permanent members - the United States, Great Britain, France, Russia and China.  Of the five, the United States has been Israel's only steadfast ally on the Security Council, regularly vetoing any effort deemed unwelcome by Israel.

Obama alone controls his country's vote at the Security Council.  Of the other members, Russia and China could be expected to back the Palestinians.  France, too, is also onside and it's hard to imagine the Brits wouldn't follow America's lead.

Once recognition of the Palestinian state had the power of the Security Council behind it, the legitimacy of Netanyahu's occupation would be shattered and actions could be instituted, perhaps beginning with punitive sanctions, to lift the Israeli siege.
Posted by The Mound of Sound at 7:48 PM

Entirely possible now. Netanyahu's open snub of Obama and campaign declaration negating a two-state solution don't leave anyone incentive to keep up appearances - Dyer points this out. It's interesting to think that his re-election actually undermines Israel's security and could be viewed a turning point in the coming months and years.

You are joking, but lets play this out...

Any attempted sanctions (which I would totally support) would be repudiated by the Canadian self-proclaimed commander-in-chief as tantamount to support for terrorists, thereby illegal under bill C-51. Of course, I humbly apologize to causing more surveillance due to my announced support of sanctions, which again are likely to be viewed as support for terrorists by our dictator-in-chief. My take on ConParty self promotion

No, BL, I'm not and, as Boris so kindly noted, Gwynne Dyer also sees it this way. I just read his column and heavily excerpted it in the next post.

Harper remains Netanyahu's steadfast ally but they're cut from the same cloth. That said, I'm not sure that we have a veto on the Security Council. Thanks to Steve Harper we can't even get a seat on the UNSC, the rest of the world won't have it.