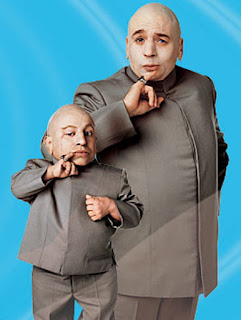 It's hard not to see Trump's new communications director, Tony Scaramucchi, as anything but the Cheeto Benito's "Mini-me."


"White House officials and outside allies say the President is revelling in Scaramucci's campaign against Priebus - undertaken through cable news appearances and a billow of tweets, some of which were subsequently deleted - and is thrilled to see a top staffer placing a publicly bombastic emphasis on White House leaks to the press, which consistently infuriate the President," the Daily Beast has reported.

One staffer told the Beast: "The President specifically gave him the green light to go after Reince."

He ended the call by saying: "Yeah, let me go, though, because I've gotta start tweeting some s--- to make this guy [Priebus] crazy."

Scaramucci's attack on Priebus was not only unprecedented, and perhaps unhinged, but often absurd.

He accused Priebus of leaking personal financial information, which actually appeared on Scaramucci's publicly available disclosure statement; he suggested that leaking was "treason"; he boasted he had called FBI contacts to encourage an investigation (a move that would be illegal) and finally he rang up a cable news network to deny the contents and context of his conversation and of a bunch of his own tweets.

If all this reminds you of anyone, well yes, Scaramucci is the embodiment of his boss. Like Trump, he has no experience in politics and no apparent understanding or interest in its norms and processes.

He appears to hold an unwavering faith that his own world view represents universal truth, at least until it changes over the course of the day.
Posted by The Mound of Sound at 7:46 AM

Mini-Me better watch his back. While The Donald is surely lapping up Mooch's infatuation with him, the orange shitgibbon's ego will soon tell him there's only room in this town for one Donald Trump.

The Mooch's presence in the White House puts to rest any speculation that Trump is capable of change, Mound.