The "Old Guard" of Arctic Sea Ice is Breaking Up. 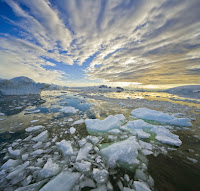 We're getting used to the loss of Arctic sea ice. There's less of it. What there is has thinned. Summers open ice free passages for navigation. But there's some Arctic ice that is thicker than most, ice that doesn't break up. Or, there was.

The oldest and thickest sea ice in the Arctic has started to break up, opening waters north of Greenland that are normally frozen, even in summer.

This phenomenon – which has never been recorded before – has occurred twice this year due to warm winds and a climate-change driven heatwave in the northern hemisphere.

One meteorologist described the loss of ice as “scary”. Others said it could force scientists to revise their theories about which part of the Arctic will withstand warming the longest.

... “Scary,” wrote Thomas Lavergne, a scientist at the Norwegian Meteorological Institute, in a retweet of a satellite-gif of the blue water penetrating white ice and exposing hundreds of miles of the Greenland coastline.

He said this would flush chunks of thicker ice out through the Fram or Nares Straits into warmer southern waters.

“I cannot tell how long this open water patch will remain open, but even if it closes in few days from now, the harm will be done: the thick old sea ice will have been pushed away from the coast, to an area where it will melt more easily,” he added.

Well, kids, let that be a lesson to you. When temperatures are above freezing in the midst of the dark Arctic winter and climb above 90F in the summer, that ice is going to be lost. But look on the bright side. Think of all the new areas that will open up for seabed oil drilling.

Hmmm! The Sin John's folks are having a field day selling Arctic ice water to the Europeans and other places. Ron Stamp founder of the company Glace Water is doing well from all those ice bergs floating by Sin (St) John's. At least someone is making use of the "Great Melt". Anyong