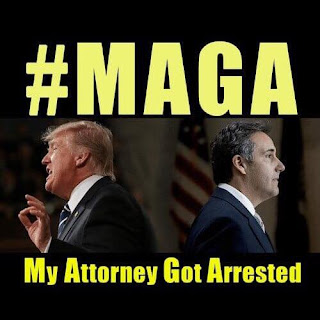 Bad day for Donald Trump. Earlier in the day it was announced that Trump's supposed lawyer and personal fixer, Michael Cohen, has cut a plea deal with the US attorney for the Southern New York District. He appeared in court today to enter guilty pleas.

And Trump's former campaign manager, Paul Manafort, has been found guilty on eight of the eighteen felony counts at trial. The jury was deadlocked on the remaining charges - i.e. he wasn't found "not guilty" on anything.
Posted by The Mound of Sound at 1:56 PM

Not to worry Trump is holding a rally tonight. He will explain to us what really happened here with that lying Cohen and poor Mr. Manafort.
Or we could Q��


This is "Through the Looking Glass" stuff, Willy.

Trump is going to have a harder time with two more intimates convicted or pleading guilty, added to Flynn and the others, to claim this is a witch hunt.

What I relish is how these setbacks get under his skin. Must be fun being a Trump aide today.

The downfall has begun.

I remember when Trump first won Howard Stern was wondering why Trump wanted to win, being President of the United States was actually a step down in life style for Trump. He had it all,and Howard Stern knew it was going to end poorly for Trump, he was right being president was the worst mistake Trump ever made, when it looked like he was might win he should have dropped out.

"Duncan Hunter was the second congressional Republican to sign-on to Comrade Trump’s 2016 Goat Rodeo Campaign, Chris Collins being the first, and now they both are in trouble for assorted financial schemes.

Water seeks its own level."

Two more seats for the Democrats to pick up.

@ Gyor. I also remember Howard Stern's reservations about Trump entering politics. He seemed to genuinely fear for what awaited his friend.

.. it would be great to see the Trumpian farce flip flop & face plant, finally. Main Media can pile on & crow how they were investigating all along, to bring the MAGA man down and face reality.. oh sure..

It was the typical Trumpian house of cards & now we will see how brazen Trumpalo Stupido is. Like many others, I've maintained from the very beginning of this limited edition kabuki theatre run, that it was all a shaky scam by a classic flim flam idiot & grifter. Nothing has changed, nothing is new.. its just bad business as usual in Trumlandia. Donald, Ivanka, Jared & the twin trophy hunters A-holes - fraud, failure, scummy product.. that somehow, to some people was thought of as a useful even desired 'brand'. One can only assume the same trendy idiots voted for the predictable thug as well. ('i voted for president Trump because he's a successful business man') (say what?)

Oh he'll bluster, tweet & deny/delay.. but we can almost hear the chopper coming for the last ride - to take dear Donald away - no more US Marine salutes..for the golf presidente.. and he should lose all of his five or six Secret Service details & be forced to re-hire his tiny private army, guarding Trump Tower..

This is a thug on the edge of being set adrift in a rowboat.. if the Russians or Chinese or some Slovobian or Mongol or German bank decide to call in all his markers or release pee footage.. it is certain..

Aw, he'll just pardon the both of them, and throw in another for himself, just in case.
Politics may be corrupt, but so is the justice system.

Actually it is 0:0 in the Swamp-Trump battle.
Manafort's tax/fraud charges are irrelevant while the use of law tricks to classify payments to prostitutes as "an election expense" is just a plain absurd.

A Pardon strips Manifort of his 5th Amendment rights, so it's testify or jail. In addition, State charges are in the pipeline for Manifort. President's can't pardon State charges.

He's already abandoned both of them.

With your lack of understanding of Campaign Finance Law, you are perfectly qualified to join the Insane Clown POSus Crime Family.