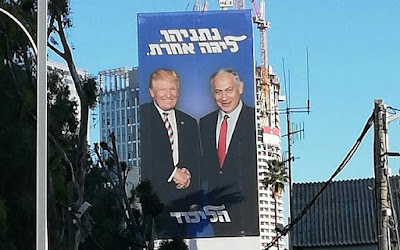 Israelis approaching Jerusalem are being greeted with an 8-storey poster of Donald Trump and Benjamin Netanyahu beneath a caption, "a different league."

To Haaretz correspondent, Bradley Burston, these towering campaign posters send a message. Netanyahu and his followers have lost what it means to be Jews. They're MAGA people and that's how they're running Israel.

"The word 'Jewish' has positive connotations for me. I think of warmth, humanity, humility, humor, honesty. When I look at Binyamin Netanyahu's face, at the coldness, contemptuousness and bottomless cynicism in his eyes, I see none of those qualities. There's nothing Jewish there."

And there it is. So profoundly, in so many ways, is Benjamin Netanyahu not a Jew. Neither are many, many of the members of his government. Foul of heart, gutter snide, they have no regard for the teachings of Judaism which forbid shaming, command respect for the non-Jew and the migrant, set out the the ideals of compassion, lovingkindness, universal human rights, charity of spirit and material generosity. Bibi and his close loyalists spit with disgust on the idea that all were created in the image of God - even leftists, Palestinians, journalists.

They are not Jews – the Oren Hazans, the Miri Regevs, the David Amsalems, the David Bitans. Neither are the nominally religious Kahane wannabes aching to claw their way into the Knesset.

They are MAGA people. And they run Israel.

...a Sunday drive to Jerusalem removed any doubt. Approach from the west, and it's not the city which welcomes you, but Donald Trump. All eight stories of him, in Stalin-grade living color. Drive a bit closer, and Bibi comes into view beside him, same size, hand in hand with Trump. Above it all: "NETANYAHU. A DIFFERENT LEAGUE."

It's the league of Netanyahu's friends Viktor Orban in Hungary and Mateusz Morawiecki in Poland and Rodrigo Duterte in the Philippines and Jair Bolsonaro in Brazil, and Donald Trump in Mar-a-Lago. It is the league of enablers and exploiters of Holocaust denial, supremacism, Hitler appreciation, misogyny, homophobia, Islamophobia, scorn for the disabled, and outright anti-Semitism.

The less Jewish Israel becomes, the less its leaders – and especially, its state-paid extremist rabbis – are guided by Jewish values, the more they worship idols in the form of settlements and geography, the more they divide the Jewish people into Jews (the pro-Netanyahu Right) and Negligible, Disloyal Leftists (everyone else), the harder Netanyahu works at passing bills like the Jewish national-state law.

The law that, more than any other, violates Jewish values.

The "Jewish" law which intentionally, brutally, unflinchingly repealed the blueprint for Israel which had committed the nation to ancient Jewish directives for social justice, the Declaration of Independence.

The "Jewish" law explicitly written to counter and negate sections of the Declaration based on teachings of the Torah. The "Jewish" law meant to quash the Declaration's pledge that Israel would be "based on freedom, justice and peace as envisaged by the prophets of Israel; it will ensure complete equality of social and political rights to all its inhabitants irrespective of religion, race or sex; it will guarantee freedom of religion, conscience, language, education and culture; it will safeguard the Holy Places of all religions; and it will be faithful to the principles of the Charter of the United Nations."