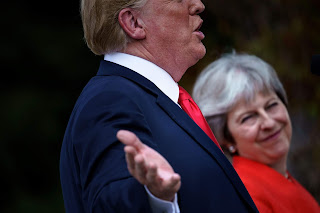 What do Theresa May and Jaques Parizeau have in common? They both see/saw the electorate as lobsters in a pot.

Parizeau made the clumsy remark in the 2006 Quebec sovereignty referendum that, thanks largely to Jean Chretien's neglect, Parizeau very nearly won.

Parizeau's "lobster" reference was about "leave" voters who might be won over by assurances of follow-on negotiations with Ottawa, a second chance, etc. that conveyed the idea that the vote wouldn't be a trip over the cliff if the PQ won. Instead, he confided to his associates, those gullible voters, once the referendum succeeded would be like lobsters in a boiling pot. The PQ would have the unilateral right to secede from confederation regardless. If the gullibillies were duped, so what?

Theresa May is taking a somewhat similar approach to Brexit. Sure the Leave campaign might have rigged the vote - Cambridge Analytica, dodgy campaign finance irregularities, laughably empty assurances pulled straight out of Nigel Farage's ass - but, so what? Who cares if the razor-thin vote for Leave was manipulated? Who cares if no one had to give voters the truth about Brexit? Who cares about the shift in public opinion? Who cares if the Irish problem was not foreseen and remains unresolved? What matter if, less than two months before Britains' date with the headsman, nobody still knew what Brexit will look like? The lobsters are in the pot, that's an end of it.

The Tories are divided into camps. The opposition Labour party is divided into camps. There is no consensus in the House of Commons. Theresa May has been repeatedly rebuffed in Parliament. The country is divided, more in favour of Remain than Leave. Preparations for the chaos of a hard Brexit are virtually non-existent save for a plan to mobilize the army and, if necessary, get the Royals out of Buck House to safety.

There'll be no snap election. No second referendum. The lobsters have spoken, even if they now wish they hadn't.

If you want to experience the power of misinformation and misdirection, listen to James O'Brien's call in talk show on LBC radio.  I wrote about him the other day, even posted a clip of O'Brien shredding Nigel Farage, lie by lie. Go to YouTube and there you'll find plenty of episodes of O'Brien talking with hopelessly confused Brexiters who still believe it'll all be milk and honey. You might find that a bit shocking that, even now, many Brits are still hopelessly confused.

I have my own thoughts on what this means for modern democracy, not just in Britain but elsewhere too. They're somewhat disjointed and not fully fleshed out so I'll keep them to myself for now. I think I'll wait until the end of next month to see how May's Brexit unfolds.
Posted by The Mound of Sound at 9:30 AM

I guess you could say the labour party is divided into camps: there are some anti-brexiteers and second-referendumers but most of them are obviously just apathetic slugs.

Similarly a charismatic yet committed "pound"-cake could easily take over any of our major parties, filled with Slugs and Snails who would do nothing about it. (It's a fairly close call in Ontario.)

I believe I mentioned that Labour, like the Conservatives, is fractured, Chris. I am in a constant struggle to restrain my pessimism but this chaos in so many once stable governments, Canadian and foreign, is deeply vexing. Societies are fracturing at the very moment when we are being confronted with crises hitherto unknown to human civilization. People are driven today by emotions, base instincts and groundless beliefs, not logic and analysis. The wheels are coming off the wagon and, well, it sucks.