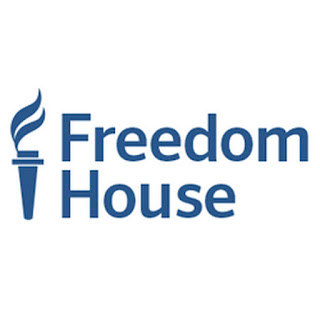 The Washington-based rights group, Freedom House, has released its 2019 report on the global state of democracy and it's not pretty. Democracy is again in retreat although most of us probably realized that anyway.

Sweden came in first with a perfect score of 100. Canada did almost as well with a 99 score.

The US? Well, not so good. Of the 87 nations judged as "free," America ranked 51st. Trump's new pals? Orban's Hungary was in the "partly free" class with a score of 70. Poland scored a surprising 84. Duterte's Philippines a partly free 61. Brazil, which has just elected a Trump clone authoritarian clocks 75 (for now). Israel oddly enough scores 78. Erdogan's Turkey scores a solid not free 31. Sisi's Egypt not surprisingly comes in with a "not free" 22 with Russia at just 20.  America looks pretty good compared to Trump's playmates.

The rankings are here.

Sixty eight countries suffered net declines in political rights and civil liberties during 2018, according to the report. The United States ranked on a level with Greece, Croatia and Mongolia but well below other democracies such as Germany, France and the United Kingdom.

“The greatest danger comes from the fact that American democracy is not infinitely durable, especially if a president shows little respect for its tenets,” said Michael J. Abramowitz, president of Freedom House. “Antidemocratic rhetoric and the rejection of democratic constraints on power can be first steps toward real restrictions on freedom.”

Such deterioration in established democracies such as the United States also could potentially hurt the cause of freedom globally, the report said. “Other nations watch what is happening in the United States and take cues from its leaders’ behavior. The ongoing deterioration of American democracy will accelerate the decline of democracy around the world,” said Abramowitz.

This is the 13th straight year that the “Freedom in the World” report has found a decline in global freedom. “Just as we have called out foreign leaders for undermining democratic norms in their countries, we must draw attention to the same sorts of warning signs in our own country,” said Abramowitz.

We get 99? with our false dichotomy Lib/Cons? with our FN relations? with our support of military juntas around the world? with our disparate incomes? with our concentrated and muzzled press?

I guess the idea that I can make this comment counts for something, but it's pretty thin gruel for those on the receiving end of the short straws in our society. Is this being the one-eyed kind in the land of the blind?


Hi, Danneau. I deliberately avoided remarking on Canada's score. Glad you did.

I do not trust these guys. There may be some worth in the aggregate trend, but I'm willing to bet a whole lot of the individual rankings are significantly politicized. Including maybe ours, on the upward direction.

It’s a ranking based on political and civil rights available to the public and how equitably they are distributed.

It’s not a ranking of what the society does with those rights and freedoms.

Never the less; BC has signs of democracy with the legislature corruption affair .
Daryl Placas's finding certainly swung the vote in the Nanaimo by election.
The inability of the Liberals( in name only) with a well known candidate to beat a dead beat NDP candidate still surprises me.