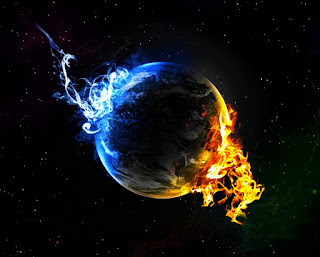 A few years ago I took an excellent online course on climate change produced by Germany's Potsdam Institute with the financial support of the World Bank.  The lectures featured some of the world's top climate scientists including Potsdam's then director, Hans Joachim Schellnhuber.

There's a new book out that deals with those scenarios, "The Uninhabitable Earth" by David Wallace-Wells. You can read reviews of it in Grist here and in The Guardian here.

There's nothing particularly new in the book. Uninhabitable Earth is more of a compendium, a digest of years of climate science research that points to a dystopian future for a lot of the planet and it's coming on faster than you probably imagine.

For those with little appetite for actually buying Wallace-Wells' 230 page book, you can get a glimpse, a free preview from his 2017 article in the New York Magazine here.

The author deals with issues such as "airpocalypse" - the worsening contamination of the air we breathe that we're now seeing from Beijing to London. Then there's "climate apathy," a common condition that many of us have to some degree.  Climate change sucks, we know it, we feel powerless and ultimately resigned to our fate. Grist offers a 21-day climate apathy detox programme here.

Wallace-Wells introduces his readers to the emerging "climate caste" system in which the affluent adopt costly coping mechanisms while the po' folk take it in the neck.

Then there's this from the Guardian review:


Between 1833 and 1836, an ambitious young New Yorker painted his vision of the evolution of human society. In five grand canvases, Thomas Cole described an arc from nature, through pastoralism and empire, to desolation. This is the archetypal story of rise and fall.

In The Uninhabitable Earth, David Wallace-Wells now takes up Cole’s mantle, updated for the 21st century. We’re at the apex of the story arc, pivoting from blind triumph to hubristic ruin. He tells of coming climate catastrophes, brought on by our complacency and profligacy. These devastations will likely end history, culture and ethics as we know them. The portents surround us, but we wilfully turn away. A glimmer of hope, though, is present if we mend our ways.

...Like Cole before him, Wallace-Wells’s project is a moral one, an indictment of his culture. Both narratives aim to convince us that the guiding beliefs of our times are wrong. But unlike Cole, who believed that self-annihilation was inevitable, Wallace-Wells insists that we can snap the narrative arc of rise and fall. Amid his stories of desolation and travail, he underscores our agency. This accounts for the excitement he feels about his newborn daughter’s future. She will live on a planet burned, flooded and baked out of recognition. But she will also, he believes, be a participant in what he calls “literally the greatest story ever told”, the possibility that calamity might somehow catalyse “a happy ending”.

If you prefer an audible look at dystopia, there's an NPR interview with Wallace-Wells you can listen to here. Here are a few pearls from that conversation:


...if you had to imagine a threat large enough to really call into being a true network of global cooperation, climate change would be it. Its all-encompassing. It challenges the lives of everybody everywhere on the planet. And yet, it's really reaching a crisis point as we're all retreating from our international agreements and commitments. How do these climate impacts transform the relationship between nations and the responsibilities that we feel towards one another?

One quite alarming possibility is the one that we're seeing today, which is that nations recoil. Another possibility is that we will be kind of called into a kind of brotherhood, sisterhood where we realize that we're all dealing with this threat together, we all bear some responsibility for it and we should do everything we can collectively to deal with it. But I don't think that's - you know, I don't think it's a safe bet that we'll end up in that happy place.

The author identifies three common misunderstandings about climate change; the true scope of its impacts, the speed at which these impacts are setting in, and the severity of what's coming.

My take is that Wallace-Wells is generally right. I've spent more than 15 years scouring online sources, reading scores of peer-reviewed studies and papers, various government reports, news accounts and, occasionally, corresponding with some of the leading climate science types in the business today.

When I began the conversation was that if we didn't do thus and so then all sorts of nasty things might occur by the end of the century. What we believed 15 years ago, and what has transpired since,  what we know today is astonishing, alarmingly astonishing. We got it wrong. We were much too optimistic, way off the mark.

My take is that, over the coming decade, the 20s, we will see climate change as we do not understand it today. I may sound like a Cassandra to you but, trust me, I'm not. There are some highly educated types out there whose predictions are beyond dystopian. I don't even go there. I can't.

In my view, nothing will change until we can get the politics and stranglehold of big/dark money influence out of this issue. Doesn't matter left or right, believe or not believe, there needs to be a huge paradigm shift, economy or the environment, jobs and exponential growth etc etc, none of this is a match for climate change. The good old lesson of mother nature trumps all applies to climate change. Sadly, this won't happen and we're doomed to its effects, hold on to your hat everybody, future be damned.

A good parallel is the current measles outbreak and conversation around anti-vaxers. The outbreak happened because of some who don't "believe" in vaccinating their children. Same scenario is playing out with climate change.


BCW, I share your negative outlook. Note I said negative, not pessimistic. To some they may seem indistinguishable yet there is a world of difference.