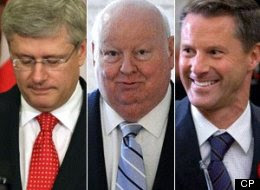 Justin Trudeau is responsible for sneaking that corporate diversion authority in a 500-page omnibus bill. That was underhanded. That doesn't make him some monster, an outrageous abuser of Canadian values. Let's go back one administration to the days of Shifty Steve Harper.

Zero for thirty three. That was the outcome of Stephen Harper's political persecution of former Tory senator Michael Dennis Duffy.  33 charges, talk about the "kitchen sink."

The RCMP was so badly knotted that it had to invent the "immaculate bribe" in which there was just one party, Duffy.

Early on in the Duffy fiasco I discussed the case with a mutual friend who was involved with the defence. I put in my two cents worth - this wasn't a case of bribery by Duffy but a case of extortion by Nigel Wright, Harper with the collaboration of the Tory leadership in the Senate and prominent individuals within the Conservative Party.

The key was right there staring everyone in the face. It was the Duffy email, leaked to CTV's Bob Fife that brought the skulduggery into the public eye.

The Duffy email, which he sent to his supposed confidantes, outlined the deal that Harper and Wright had orchestrated for him. It was dated, we knew when it was sent, and that was critical to the case. Pretty much everything that happened after the leak was disputed but not that email nor what ensued in the weeks after it was sent but before it reached Fife.  Those events were all locked in. There was no way to make those facts disappear.

Duffy's email set out terms and conditions of the deal, all of which came to pass. He was to shut up, stop talking to the press. He was to stop cooperating with the Deloitte auditors investigating various Senators and their expenses. He would be given the money and would use it to pay off his Senate tab. And the PMO would see to it that the Senate report went "easy on" Old Duff. All of that duly transpired.

This all unraveled due to one thing and just one thing - Duffy's incredibly stupid email. Everything described by Duffy as "the deal" came to pass and, without that leaked email, the public would never have been the wiser. Duffy stopped cooperating with the auditors. He was given the money. He paid off his Senate tab. The Tory leadership in the Senate laundered the auditor's report on the Cavendish Cottager. Problem solved.

Then that email got into Bob Fife's hands and with that Harper, Wright and the Senate hangers-on scrambled to create a narrative that absolved them of anything untoward and heaped all the blame on Duffy.

They knew Duffy had two huge vulnerabilities - a wonky heart and an empty purse. How better to bury him than with a massive criminal indictment that would easily exceed his entire net worth? And, with the assistance of the RCMP and a cooperative Crown Counsel, that's exactly what they set out to do.

The whole "immaculate bribe" business, a bribe that had only one party, was as clumsy as it was obvious. Without pursuing Duffy and Duffy alone, Nigel Wright would be implicated. Wright, meanwhile, was telling anyone who would listen that, if he went down, he'd be taking others with him. Others, perhaps like Stephen Harper? A conspiracy? Sure.

When Justice Vaillancourt acquitted Duffy of every charge that had been used to try to bury him he specifically mentioned that there was plenty of evidence adduced at trial of serious crimes only he didn't have the real criminals before him in the prisoner's dock.  He didn't name names. He didn't have to.

So today's Harper-loving Tories can hardly be heard to be outraged at political meddling in the judicial process, not when not that many years back their revered leader put on a master class in judicial meddling.

You could call the Duffy persecution/prosecution a "bitch hunt ". That was probably the only time a Canadian faced criminal charges for having a dog die a natural, if premature, death.

It nothing but tit-for-tat.

tit-for-tat, what does that even mean in this context?

Howcum Mound nobody gives a flying fuck about the fact that Chuckles met with SNC too.

Seems to me to be a good point to blunt anything that the cons have on the libs - Scheer did it too!

There was another "immaculate bribe" during the Harper era. It saw Arthur Porter die in a Panamanian jail after allegedly taking a $22 million kickback on the construction of McGill's new hospital in Montreal. The alleged bribe giver, SNC-Lavalin, was never charged and almost never mentioned in coverage of the story.

And once again we see much of the media carrying the company line about how it's "too big to fail" and has rooted out the few bad apples. Yet somehow it and it's affiliates remain barred from UN contracts. The Canadian plutocrats really do look after their own.

I agree, Cap. Lavalin has achieved a "too big to fail" stature and knows how to throw its weight around.

The crime it may have committed is only part of the government's problem. What do fines matter in the long run? If a "too big to fail" company repeatedly resorts to criminal activity, you need to dismember the company, force it to divest itself of enough of its divisions, that, in future, it can be properly punished criminally.

Companies like Bombardier know how to hive off divisions to improve their business model. Time to do something along those same lines with SNC-Lavalin.