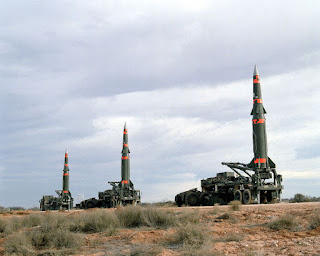 Despite glasnost and all the disarmament talk since Reagan and Gorbachev inked the IRT, the world is still up to its arse in nuclear weapons.  There are silo-launched ICBMs like the US Minuteman. The Russians and Chinese are fond of mobile ICBMs that can be hauled up and down highways to supposedly make them harder to target. There are, of course, submarine launched ballistic missiles. Then you've got nuclear-capable cruise missiles and even good, old fashioned nuclear gravity bombs.

What made the last generation of intermediate range missiles so insidious was their range and speed. You could literally park them on your adversary's doorstep and, when launched, they could be on target in a heartbeat. America's Pershing II had a speed of Mach 8. That was the problem. There might not be enough time for the target nation to activate the human chain of command. Those missiles raised the risk that your enemy could take you by surprise before you could even lift a finger to fire back.

This led to a new technology of "launch on detect." It cut out the middleman, humans. When your radar saw what it perceived as an incoming missile attack it simply fired back. There would be missiles in the air and nobody pushed a button much less ordered the salvoes. There wasn't even time to call back an errant launch.

Of course, mistakes happen. Radar systems at times can't tell a benign return from an incoming strike. That's where humans are needed to intervene and interpret as they did in 1995 when the Norwegians launched a Canadian Black Brant research rocket that had a radar profile almost identical to a US submarine launched Trident missile.

The matter was decided when the Brant separated, dropped one of its engines, and fired up another. The radar signature now looked so much like a multiple re-entry vehicle (MRV), a missile carrying multiple nuclear warheads, that military officers no longer had any doubt.

There were now five minutes during which the missile's trajectory would be un-tracked by Russian radar, and when it could strike Moscow; a slice of time that was devoted to deciding whether to launch a counterattack.

Boris Yeltsin was alerted, and immediately given the Cheget, the "nuclear briefcase" that connects senior officials while they decide whether or not to launch Russia's nuclear weapons. Nuclear submarine commanders were ordered to full battle alert and told to stand by.

Apparently Yeltsin doubted the U.S. would launch a surreptitious attack and within five minutes, Russian radar came back confirming the missile was heading harmlessly out to sea.

Russian citizens didn't find about about the incident for weeks, and of course it's been reported in the U.S. news since. But the event never achieved the renown of the Cuban Missile Crisis, though it seems to have brought us even closer to the brink of nuclear war.

Now, imagine Russia still had a "launch on detect" system, the kind needed to deter a first strike intermediate range missile attack. Yeltsin's intuition would not be a factor.  Which is why the intermediate ballistic missile treaty matters more than most nuclear accords.

If you're in the mood for another "blast from the past," here's Sam Cohen, the inventor of the neutron bomb.

Unfortunately -- on both sides -- wisdom and caution have been thrown out the door, Mound. This time around, Slim Pickens won't be riding the bomb down to its target.

We used to laugh at the insanity. No more.

Your point also goes to why NONE of this should be left to some sort of AI as I fear there will be increasing pressure to do because the algorithms will be "neutral".

I was relieved when Carter scrapped the neutron bomb, a "clean" weapon that would have significantly lowered the nuclear threshold. I was even more relieved when Reagan and Gorbie decided to scrap the IRBMs, ending the "launch on detect" Sword of Damocles.

There was some talk of the Americans (and perhaps the Russians) reviving neutron warheads (low blast/intense but brief radiation) and now it seems that we'll be returning to IRBMs.

What could possibly go wrong?


That's right, PF. Weapons that can deliver a nuclear warhead to your capital in five minutes or less (or it's free) are incredibly destabilizing, especially if you have an emotionally unstable head of state.

I was a teenager then. I remember being scared of dying. I think a lot of people were . . . you go about your life doing your thing, but sometimes when you're alone or when you see some current events thing about Pershings or Cruise Missiles or an ad for the movie War Games, you'd just sort of think "We're all going to die, aren't we?"
Fuck, it's all coming back.


I was a pre-teen during the Cuban Missle Crisis, PLG, and I can remember quite clearly the weekend we all thought we were going to buy it.

My buddies and I discussed it at some length and decided if war broke out, Detroit, just across the mouth of Lake St. Clair would be annihilated and us with it. We figured the best outcome would be to stand out on our front lawns facing the then US industrial giant and wait for the flash bulb to go off.

At noon on Saturdays the air raid sirens would sound on the American side. On an island in the Detroit River, near where it met Lake St. Clair, there was a battery of Nike missiles in gantries beneath grass covered doors. The doors would open and, one by one, these missiles would rise in a choreographed dance. They were in a brilliant white paint that would gleam in the sunlight. As the "all clear" sounded they would repeat the dance as they went back into their bays and those grass doors closed over them.

What we didn't understand at the time is that those nuclear-tipped Nikes were intended to intercept Russian bombers - over Canada, well clear of the American population.

With the collapse of the Soviet Union we seem to have lost a good deal of the "institutional memory" that evolved into the MAD doctrine and kept itchy fingers off those buttons.

Trump has the character flaws that could trigger an inadvertent or ill-thought out war. Yeah, it's a bit scary today.

The US has no intermediate missiles or warheads any more. Nor do they have any projects in place for such missiles or adapting similar conventional missiles over to nukes. The US won’t have any intermediate nuclear missiles for at least 4 years.

Russia does have intermediate range missiles that are nuclear capable and warheads for them.

The US under Dolt 45 has also lost the few allies in Europe that would allow the deployment of such missiles on their turf.

So, while Putin can threaten the EU with immediate destruction, the US cannot threaten Russia the same way.

So, Putin’s Puppet continues to be the gift that keeps on giving for Russia.

It's the optics.
The USA has no 'hypersonic' missiles the Russians do.
Trump lives in a land of power 'trumps' all.( forgive the pun)
The hypersonic missile that Russia tested has scared the USA ; particularly Trump.
Trump needs something to bully with.
Problem is , will he do something stupid to prove his ,supposed, masculinity?

.. allow me to prick a few balloons.. I recall not long ago when the Main Media and the Trump brain trust were shouting and snouting about North Korea launching against either South Vietnam or Singapore or Japan.. or threatening the USA (does it even matter with a big nuke ?)

At that time, it was apparent that Donald Trump really could not point to North Korea on a map that had no country labels.. further, a humerous poll, asked Americans to pinpoint North Korea (many do not know where Canada ks eh !) and so it was that people put their x marks the spot in many and wondrous places on an unlabeled map of the world but had countries borders etc.

Hell n damnation.. x's in the British Isles, down by Cape Horn, Norway, Iceland, France, Germany.. none were spared. But what got my attention was that The Joint Chiefs of Staff knew this was the reality of the President they were briefing as well. He had no idea. I extended my thinking.. noting that middle of China and mid Russia were getting hit with x's.. and then it hit me..

So it begs the question.. what does Trump have to do with North Korea's Nuclear threat? Towards Viet Nam ? Do we think China or Russia would find that acceptable ? Nulear Fallout coming their way - half the year ? What about North Korea going after the USA ? With resulting retaliatory nuking of North Korea.. same deal.. Nuclear Fallout impacting Russia and China as collateral damage..

Mound can be more specific re the weaponry, payloads, targeting, fallout footprint etc etc than I.. but keep this tidbit in mind..

Rumour has it The SALT Treaties were suddenly brought to life, when a sharp American spook analyst noted that intense drought was beginning to really hammer the Soviet Union. He also noted the project climate duration of the ongoing drought would cause Russian farmers with failed crops to begin eating all their stored harvest.. and would then eat their farm animals before they starved to death. Or died of dehydration. That would include eventually, their breeding stock, milk cows, sows, chickens.. everything.. Russia would need grain ! Wheat ! America had leverage with bumper crops, as did Canada .. and so Russia came to the table.. the SALT negotiation table.. and the Cold War took a few breaths ..

Gee wizz what is going on in Asia currently.. and will only get worse ? ? DROUGHT ! ! Does that include North Korea ? You bet the farm it does.. and India and China and Pakistan .. These are strange times.. and they will only get stranger.. So many articles I read.. are comverging.. Zones of Disorder. Drought As Glaciers Disappear. Shrinking Water Table and Aquifer Levels. Nuclear Saber Rattling, Environmental Refugees. Accelerating Climate Change. Rising Sea Levels. Fishery Failure.. egad.. its bad..