CBC (Finally) Calls Out Scheer as Soft on Racism

Andrew Scheer knew he wasn't dancing with the angels when he came out to greet the mixed crowd of pipeline supports and white nationalists (or worse) who journeyed together from Alberta to Parliament Hill.


...as several observers noted watching the convoy make its way to Ottawa from Alberta, United We Roll had also become a space for far-right groups to spew racism and xenophobia. Signs denouncing open borders, protesting Canada signing on to the global migration pact and accusing the prime minister of treason hung alongside signs supporting pipelines. Some convoy participants wore hats that said "Make Canada Great Again," a nod to U.S. President Donald Trump's slogan that has become associated with denigrating Mexicans, asylum seekers and banning Muslims from entering the U.S.

Because the convoy has become affiliated with such unsettling rhetoric, unwavering support from high-profile Conservative politicians — such as Conservative leader Andrew Scheer, who addressed the group last week — is troubling, and could potentially hurt the party's chances in the upcoming fall election.


Scheer ought to have made a distinction between his support for Canadian oil workers, and support for the racism and violence that has been associated with United We Roll. Conservative Senator David Tkachuk even told the crowd to "roll over" Liberals across the country, and he has since refused to apologize.

The rally has also been associated with Yellow Vests Canada, a group whose Facebook page is rife with racist and xenophobic views, particularly towards Muslims and immigrants. In fact, the United We Roll convoy was originally named the Yellow Vest Convoy, but was changed due to the obviously problematic association.

Members of the Yellow Vests Canada Facebook group have advocated for MP Iqra Khalid to be deported, called visible minorities sub-human and scum, and made death threats against the prime minister. Despite that, United We Roll lead organizer Glen Carritt implied that everyone would be welcome to attend ("It doesn't matter — you can wear a yellow vest, or blue coveralls or black hardhat or suit and tie," he said) and Yellow Vest organizer Mark Friesen was indeed in attendance.

One of the speakers at the rally was Faith Goldy, who was fired from Rebel Media after appearing on a neo-Nazi podcast, and who regularly bemoans the erosion of "white identity." Scheer spoke on the same platform that she did, ignoring what should be a toxic association.

...During the presidential election in 2008, Republican John McCain defended Barack Obama against racist questions from audience members during a town hall event. Scheer could just as easily have spoken at the United We Roll rally by telling protestors he supports their efforts with regards to the oil and gas industry, while simultaneously chastising the racist and xenophobic rhetoric that was circulating.

Instead, Scheer simply stated: "We're standing with you."

Know who else is standing with Faith Goldy? This lout: 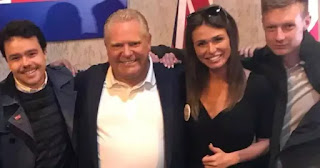 As for me, I blame Preston for legitimizing the bigotry that infests today's conservative movement in this country. They formed a coven inside Manning's Reform Party and they're still just beneath the surface.
Posted by The Mound of Sound at 10:28 AM

If the libertarians had calculated that pandering to the bigot & racist segments was going to hurt their electoral chances, they wouldn’t be doing it. The outreach is deliberate. It’s a reminder to those who might have become intrigued by the more blatant appeal currently on offer from Max, that the CRAP Party was there first, however quietly so. The reminder will be as loud as they determine it needs to be as they watch closely to ensure that whatever losses it might bring to pass are as few as their internals have predicted.

Hey, thinking of horrible racist right wing Canadian leaders, heard about Jason Kenney and vote/ID fraud? Seems there's increasing evidence surfacing that during the campaign for leadership of the new United Conservative Party, the Kenney campaign would sign up members to the party, but add many of them to the party's database with fake email addresses controlled by the Kenney campaign. Then, when the party emailed members their PIN for voting, it would go to the Kenney campaign, which then apparently used these PINs to send in thousands of votes for Kenney, pretending to be the party members in question. Seems they routed it through offshore computers, and used VPNs so the votes wouldn't all seem to be coming from the same place. The allegations, and some documentation, mostly come from within the UCP itself.

This is obviously election fraud, but it is also identity theft/fraud, which is a felony. The RCMP is investigating. Who knows, if it gets big Kenney boy could lose both the election and his freedom. Although it would be kind of amusing if he won the election anyway, became premier, and then had to go to the slammer for a felony. I certainly have my popcorn out, anyway. My only worry is that the media may smother it.

No, PLG, I hadn't heard about that. I'll see what I can find online. One thing I do know from the RoboCall scandal, it'll never get to Kenney. There'll be cut outs, sacrificial lambs, to go through first. Do I believe JK is sleazy enough for that sort of thing? Does the Pope shit in the woods?

.. arghh .. excuse my absence Mound .
will be in the barn checking my war pony's hooves

Canada's foundation
has always been about ..
the intangible mystery of 'try'

Its reflected in Canadian troops
going over the trench .. into withering fire
or Into the dark sorties against Hitler's submarines
or in the skies.. airborne, and the bomb runs

Sadly we see no such courage lately
we get partisan spew ..from parliament ..
yes, Conservative, Liberal or the like