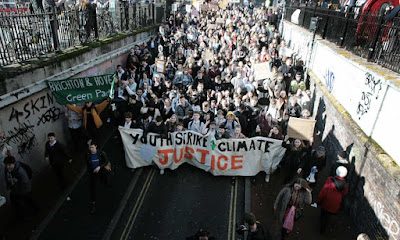 Climate change has sparked a lot of inter-generational controversy.  Millennials, in particular, are fond of blaming it all on the Boomer generation, disingenuously distancing themselves from the problem. In a word, that's rubbish.

You don't see millennials disproportionately going to jail to stop the Justin Trudeau Memorial Pipeline to tidewater.  That's mainly First Nations and life-long, law-abiding greyhairs defying the government to defend the environment and our grandchildren's future.

It's not millennials standing up to fight this. No, the fight has mainly skipped their generation. It's these kids who are fighting for the future. 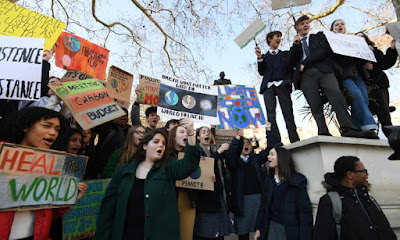 They're inspiring George Monbiot to sing their praises.


My generation and the generations that went before have failed you. We failed to grasp the basic premise of intergenerational justice: that you cannot apply discount rates to human life. In other words, the life of someone who has not been born will be of no less value than the life of someone who already exists. We have lived as if your lives had no importance, as if any resource we encountered was ours and ours alone to use as we wished, regardless of the impact on future generations. In doing so, we created a cannibal economy: we ate your future to satisfy our greed.

It is true that the people of my generation are not equally to blame. Broadly speaking, ours is a society of altruists governed by psychopaths. We have allowed a tiny number of phenomenally rich people, and the destructive politicians they fund, to trash our life-support systems. While some carry more blame than others, our failure to challenge the oligarchs who are sacking the Earth and to overthrow their illegitimate power, is a collective failure. Together, we have bequeathed you a world that – without drastic and decisive action – may soon become uninhabitable.

Oh, I know, I know. Millennials are at that stage in life where they're building their careers, buying their homes, having their babies. Not much time left over for anything but whinging.  Wait a second. Did I say having babies? Yes they are, plenty of them. That's not an excuse for sitting this one out. That's all the more reason to take a stand, dig in, protect those precious little babies, carve out the best possible future for them that you can. It's no excuse that it might (if you do it right, probably will) land you in jail even if that means a criminal record and no more winter getaways in Florida, California, Vegas or Hawaii, no more cross-border shopping.

You freely blame an older generation for something they didn't understand, not in time, but your kids, that's a different story entirely. You did that with your eyes wide open. Now act like it.
Posted by The Mound of Sound at 9:59 AM

Oh, so it's all the millennials' fault! They all travelled back in time and . . .
I see someone whingeing and it's not millennials.

When Boomers were hippies they said "never trust anyone over 30" and "I hope I die before I get old." Then they grew up, got careers and became neoliberal weasels clawing their way up the food chain in Big Liberal Cities.

What Millennials don't realize is that they are just baby-neoliberals repeating the process all over again.

Generation after generation, baby-neoliberals march arm-in-arm with People of Color and workers fighting the good fight. Then they get in the game and say, "Well there you go! Look how much we helped you!" – after accomplishing next to nothing – and walk away.

Workers and People of Color don't have this "White privilege" to just get up and walk away. They get left behind – high and dry – time and time again.

This is really a fundamental process of White culture. The idea you rebel against authority in your youth, realize how foolish you are and then get with the program: "Welcome to your Carlsberg years."

Baby-neoliberals who never grow up (or at least pretend not to) like Monbiot, Chomsky and Bernie are there to fan the flames of revolution. When the revolution inevitably fails, once-idealistic youth move on thinking, "Well, at least, we tried."

So, wait a minute Anonymous . . . sounds like there's nothing any of them could possibly have done that would have been the right thing. They're just fundamentally bad because of their identity, is that it?

Mound, this stuff has puzzled me for a long time. Labeling generations is too fuzzy to be productive. It seems to me that the big difference between me and most of those younger than me is that my thinking is still analogue while theirs is digital. That's a substantial difference. McLuhan predicted that the transistor would lead to at least as big a disruption as the introduction of the printing press. It looks to me that McLuhan was right.

Whomever we are our first priorities are water and food. Add sex, shelter and comfort we have a lot to keep us busy. As is often said, nothing focuses attention like imminent execution however until the time comes more mundane thoughts take priority.

Historically, many civilizations have collapsed spawning mass migrations seeking more productive lands. That worked in the past but we have no more places to escape to. Climate Change will affect all of us. There are going to be fights over water and food. Escape is no longer an option.

As you so rightly point out, we collectively expect our leaders, elected or otherwise, to actually attend to the business of enabling us access to water, food and a common weal. We naively thought that when governments appointed Ministers of Environment, by what ever title, that said Ministers would actually fix the environment. We have been seduced by pronouncements that Climate Change will be a problem many years into the future and we have lots of time and we have all this oil to sell. We don't even notice that our present Environment Minister now speaks with a tiny note of panic as she tells us that her beloved carbon tax won't happen before the election.

It's easy to virtue signal. Willingness to actually sacrifice is where the rubber meets the road. That's true of all generations, and also why no effective action is being taken.

"So, wait a minute Anonymous . . . sounds like there's nothing any of them could possibly have done that would have been the right thing. They're just fundamentally bad because of their identity, is that it?"

I'm saying they did nothing but pretend to take action: i.e., virtue signaling in place of real virtue. (That's the only thing that is fundamentally bad: the rotten actions of people, however they identify themselves.)

Over the past 50 years, fake progressives have been doing the same thing over and over again expecting different results. Either they are crazy – or crazy like fox: i.e., they want Western civilization to descend into a global oligarchal tyranny.

Real virtue requires real action. We don't need to reinvent the wheel. It's all been done before.

People usually don't succeed in fundamentally changing society because it's hard. Duh. Do you know, in all of history there have been lots and lots of slave revolts, but Haiti is the only example of a successful one that I'm aware of (and everyone's been on their case ever since). Guess all those other revolting slaves were just "virtue signalling".

And if all the hippies, plus Noam Chomsky and the others who never gave up, were all just "virtue signalling", then what the fuck are "anonymous" and "Karl Kolchak" doing? Pompous sneering from an armchair about the inauthenticity of the people who were in the streets sure looks like "virtue signalling" to me.

(Incidentally, it's an odd feature of the sixties that the kids weren't in the streets alongside the workers because the workers didn't show up, so the hippies can hardly be said to have betrayed them)

St. Chomsky is a neoliberal phony. Calls people "narcissists" if they don't vote for the Democrat party. He's a dynasty-builder. Wants to leave a legacy. He doesn't believe a word he says. Like Alex Jones. It's all an act.

The Grand Generations that brought real progressive eras were not ignorant hippy-dips. Every heard of keeping your enemies closer? They treated hippy socialists like lepers – because they knew they'd muck up what they were trying to accomplish.

They were able to get things done because they had sense in their heads.

Welcome to the Machine.

I don't think you know what neoliberalism is. And what you're spouting is less like real critique and more like conspiracy theory.

The idea was to moderate the hated neocon reforms of Reagan, Thatcher and Mulroney. Of course, by 'moderate' "far right" Friedmanian reforms, they meant 'expand on.'

But this was actually Neoliberalism 2.0.

JFK and PET brought Neoliberalism 1.0 on an economic-to-social-progressive pivot. "Ask not what you're country can do for you, but what you can do for upper-crust moochers like us."

They split the Left in two. Self-interested, neoliberal sell-outs on the one hand and "fight for your right to party" neoprogressives on the other.

Later came Neoliberalism 3.0 from Obama and Trudeau. They expanded on the hideous neoconservatism of Bush and Harper.

Notice how Chomsky makes criticism of the Establishment a purely academic exercise, like Manufacturing Consent.

The Donald comes right out and calls it what it is: Fake News.

Fake News led to the wars in Afghanistan and Iraq; the 2000s Housing/Derivatives Bust Out; etc.

The "Liars in Public Places" have been around for a long time. But you wouldn't know it if you just listened to Chomsky.